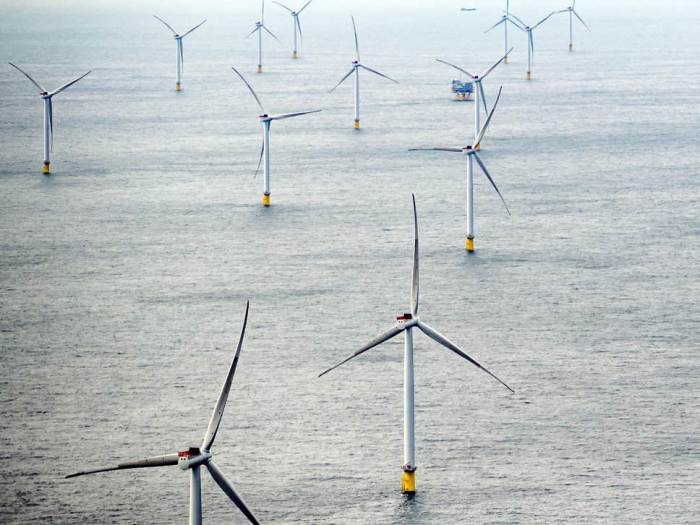 In 2010, Britain generated 75 per cent of its electricity from coal and natural gas. But by the end of the decade these fossil fuels accounted for just 40 per cent, with coal generation collapsing from the decade’s peak of 41 per cent in 2012 to under two per cent in 2019.

The near disappearance of coal power – the second most prevalent source in 2010 – underpinned a remarkable transformation of Britain’s electricity generation over the last decade, meaning the country now has the cleanest electrical supply in its history. As it did at the start of the decade, in 2019 natural gas provided the largest share of Britain’s electricity at 38 per cent, compared with 47 per cent in 2010. Second place now belongs to wind power, which supplied almost 21 per cent of electrical demand in 2019, up from three per cent in 2010.

Twenty-nineteen saw the annual total for coal generation drop below solar and into seventh place for the first time. Britain’s renewables also generated more electricity than coal and natural gas combined over a month for the first ever time in August.

As well as the reduction in carbon emissions, there was another remarkable shift in Britain’s electrical system during the 2010s. The amount of electricity consumed fell by nearly 15 per cent between 2010 and 2019, with the economy using 50 terawatt hours (TWh) less electricity in 2019 than it had done in 2010. That’s enough electricity to power half Britain’s cars and taxis if they were all electric vehicles.

Some of the reduction can be attributed to greater energy efficiency, such as more LED lighting, and the fact that more goods were imported rather than manufactured in Britain. With wages stagnant since 2010, it’s likely that lower economic demand also contributed.

The rise of the renewable generation and the fall in electrical demand allowed coal power to be transitioned off the system. Britain’s electrical grid was coal-free for over 3,700 hours in 2019, something that would have been unthinkable 10 years ago.

Wind energy set a new record of 26.5 per cent for December 2019’s generation in the UK. Including solar, hydroelectric and biomass, renewables provided nearly 37 per cent of that month’s electricity overall, with wind energy reaching a peak of nearly 17 gigawatts (GW) during the afternoon of December 10.

Since August 2018, renewables have produced more electricity than nuclear power for 17 months in a row. Nuclear fell to less than a fifth of electricity generation in 2019 – its lowest level since 2008 – due to extended maintenance periods at six nuclear power stations. This helped the annual output of wind energy to surpass nuclear for the first time in 2019.

But the 2020s will prove an even greater challenge for decarbonisation, not least because Britain’s economy is still heavily dependent on fossil fuels for transport, heating and hot water. Sales of electric vehicles are accelerating, with a quarter of a million now on the roads – but how to decarbonise heating is still up for debate.​

Encouragingly, due to cleaner electricity, a major milestone for electric heating is likely to have been reached in 2019. Using electricity from the grid to heat buildings or water is less carbon intensive than burning natural gas to get one kilowatt hour (kWh) of heat from a modern gas boiler. This means that even a simple electric heater releases, on average, less carbon than burning natural gas.

But since natural gas demand varies greatly over a day and between seasons compared to the demand for electricity, a wholesale shift from natural gas to electricity is a significant challenge. Using low-carbon gases such as hydrogen is one option to decarbonise Britain’s heat supply, as are electric heat pumps. Without a sustained focus on shifting heat and the transport sector from fossil fuels, Britain will fail to become a net-zero carbon economy by 2050.

Scaling up renewable energy generation has catapulted Britain through a decade of electrical system change but, in order to capitalise on this momentum in the 2020s, low-carbon energy must be complemented with low-carbon flexibility. That must mean the growth of industries focused on energy storage, demand reduction and management, and local control systems, ensuring that the system can continue to meet demand at all times.

After a promising decade of decarbonisation – despite policy setbacks like the green deal – the race is on to be the first G7 country to attain a net-zero carbon economy. Showing that it’s possible to fully decarbonise a large economy while remaining internationally competitive would send an important message to the world.

The next decade will see even more renewable energy deployed, such as the Hornsea Project One, a 1.2 GW offshore wind farm due to be completed in 2020. But what else do the 2020s hold? Here are our energy predictions for the next 10 years:

* Over 10,000 “active buildings” will be built. These are highly energy efficient buildings integrating renewable energy technologies for heat, power, and transport with different types of heat and electrical storage.

* Over 80 per cent of new cars sold will be battery electric vehicles.