Iran plane crash: Why were so many Canadians on board?- iWONDER 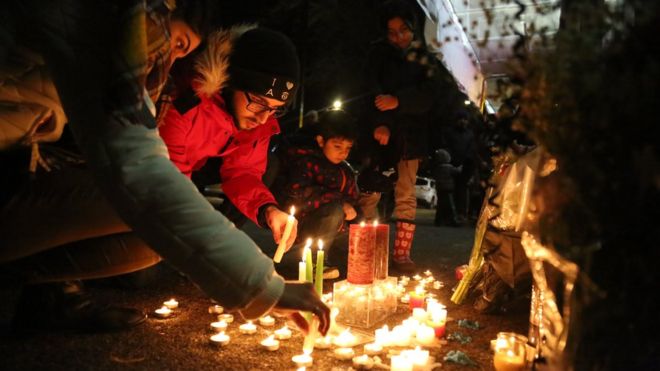 Ukraine International Airlines flight PS752 crashed shortly after taking off from the Iranian capital Tehran on Wednesday, killing all 176 passengers and crew members on board.

The plane was bound for Kiev and many on board had a connecting flight to Toronto, Canada's largest city and a transit hub.

Of those passengers, 63 were Canadians citizens. Canadian Prime Minister Justin Trudeau has said that, all told, 138 people on that flight were en route to Canada.

On Thursday, Mr Trudeau said that Canadian officials had "evidence and intelligence" that "indicates that the plane was shot down by an Iranian surface-to-air missile".

He noted it may have been in error.

The prime minister called for a full and transparent investigation into the cause of the crash for a "complete picture of what happened".

Here is what we currently know about Canada's response to the plane crash.

Will Canada be involved in the investigation?

Canada's foreign minister, François-Philippe Champagne, held a rare call with his Iranian counterpart on Wednesday evening, stressing "the need for Canadian officials to be quickly granted access to Iran to provide consular services, help with identification of the deceased and take part in the investigation of the crash", according to a statement.

Mr Champagne said on Thursday that Iran appears open to the request and Canada was moving ahead with seeking visas for their officials.

Canada has also offered technical assistance for the investigation.

The prime minister has said that "Canadians have questions and they deserve answers" about the cause of the crash.

In 2012, Canada closed its embassy in Tehran and expelled Iranian diplomats from Ottawa.

Officials say a number of allies, including France, Italy and Australia have offered Canada assistance on the ground in Iran.

Why were there so many Canadians on board?

Canada is home to a large Iranian diaspora, with some 210,000 citizens of Iranian descent, according to the latest federal census.

The country is also a popular destination for Iranian graduate and postdoctoral students to study and conduct research abroad, which is why many students were on the flight, returning to university following the winter break.

There is also no direct flight between Canada and Iran, and the Ukraine International Airlines flight from Tehran to Kiev and then to Toronto is popular because it is one of the most affordable options for the journey.

What do we know about what happened?

There are still many questions to be answered about what happened to flight PS752.

The Boeing 737-800 went down just minutes after taking off from Tehran's airport on Wednesday, leaving no survivors.

An initial probe found the aircraft experienced a problem as it was leaving the airport zone, and was "on fire".

Mr Trudeau said on Thursday that Canada had seen intelligence from both domestic and international sources, suggesting that the passenger plane was shot down by an Iranian surface-to-air missile, perhaps unintentionally.

His comments came shortly after media reports that US intelligence officials believe the flight was mistakenly shot down by Iran.

Ukraine said earlier it was examining various possible causes, including an anti-aircraft missile strike, a mid-air collision with a drone or other flying object, engine destruction/explosion due to technical reasons, and an explosion inside the plane as a result of a terror attack.

An official with Iran's Civil Aviation Organisation said the plane initially headed west to leave the airport zone, then turned right following a problem and was headed back to the airport at the moment of the crash.

He said pilots hadn't made any distress calls before trying to return to Imam Khomeini airport.

Initial findings have been sent to Ukraine and the US, where Boeing has its headquarters, as well as Sweden and Canada.

But Iran has said it will not hand over black box flight recorders recovered from a plane to the US or the plane's manufacturer, Boeing.

What has been the response?

For now, Mr Trudeau says the main goal is ensuring a thorough investigation.

"It is too soon to be drawing conclusions or assigning blame or responsibility," he said.

"Right now our focus is on supporting the families that are grieving right across the country and providing what answers we can in a preliminary way."

Who were the Canadian victims?

They were newlyweds, families, students, professionals and academics.

Sixty-three of them were Canadian nationals, but many more called Canada their home, at least temporarily.

They lived in cities like Montreal, Toronto, Vancouver, Winnipeg, Ottawa and Edmonton.

Who are the victims of Iran plane crash?
Many were in the 20s and 30s, but a number of young children were also on board.

At least two families died: Ardalan Ebnoddin Hamidi, Niloofar Razzaghi and their teenage son Kamyar, from Vancouver; and Pedram Mousavi and Mojgan Daneshmand, and their daughters Daria and Dorina Mousavi, from Edmonton.

There were numerous foreign students on board as well, like Ghanimat Azhdari - a PhD student at the University of Guelph, Ontario, who specialised in promoting the rights of indigenous groups.

How are they being remembered?

Tributes were held across the country on Wednesday night, and many more are planned in the coming days.

In Toronto, a public vigil, organised by the Iranian Canadian Congress, is being held on Thursday, and flags will be lowered at city hall until Monday.

Another vigil will be hosted on Parliament Hill in the Canadian capital of Ottawa and Ukraine's embassy in Canada has invited the public to sign book of condolences.

In Edmonton, Alberta, members of the Iranian-Canadian community estimate about 30 people who lived in the city were on flight PS752.

A memorial for Sunday is being organised by an Iranian heritage group, an Iranian student association, and the University of Alberta, an institution that lost a number of its faculty members and students in the crash.

In fact, the deaths have cast a pall over university campuses across the country. Many of the deceased are being remembered as accomplished teachers, students and mentors with bright futures who were studying and working at institutions of higher learning across the country.