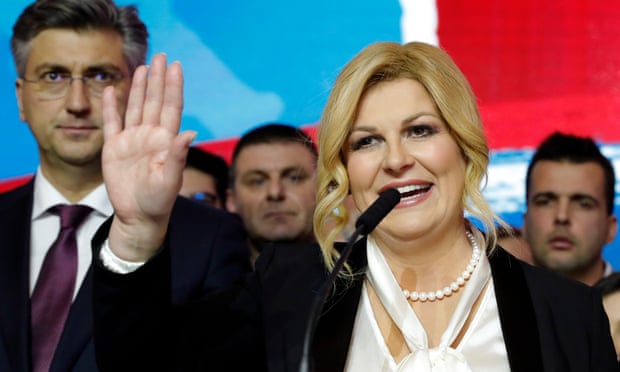 Corruption is embedded in Croatian society at school where children who cheat in tests are celebrated as “heroes”, the country’s president has said.

Kolinda Grabar-Kitarović, who is leaving her position in February following an election loss, said corrupt practices could be found throughout Croatian society but began in the classroom.

Those who did well were routinely described as “eager beavers”, the president told reporters at a press conference in Zagreb, while “those who have prepared so as to cheat on the test are heroes”.

“This is where corruption starts, on the children,” Grabar-Kitarović said. “They look for ways how to get around the system – and it is not contained to politics. It is much better than it used to be. But it is not just politics.”

Last month the former Croatian prime minister Ivo Sanader, within whose government Grabar-Kitarović was a minister, was sentenced to six years in jail, after being found guilty of taking a €10m (£8.5m) bribe in exchange for giving a Croat oil firm a large stake in a newly privatised energy company.

Grabar-Kitarović said she had been cut out of major government decisions during her time in Sanader’s administration and as a result had no idea of his personal corruption.

But the outgoing president, a fellow member of Sanader’s centre-right Croat Democratic Union party, admitted that even the daily customs of her country encouraged a culture of kickbacks.

Grabar-Kitarović said: “Most often we are not even aware of what corruption is.

“When you go to see a doctor everybody expects you to bring at least flowers, chocolates and things like that – it is customary.

“My mother was in hospital recently and my friends were asking me, why didn’t you bring anything because the nurses expect that …

“I said, ‘I am not going to participate in this kind of corruption.’ I will bring a basket for Christmas, a little Christmas gift, but that is it.“For me the bright light is the young people who have left Croatia and going abroad to different countries that they will come back and bring different ethics and ways of working life with them. And that way we will profit.”

The most recent Eurobarometer survey found that a majority of Croatians feel affected by corruption in their daily lives (59%). The country has the largest proportion out of all EU member states of respondents (16%) reporting to have been personally exposed to corruption.

Grabar-Kitarović lost the presidential election to the centre-left candidate Zoran Milanović at the beginning of January, a few days after the country had assumed the rotating presidency of the EU.

A former prime minister from the Social Democrat party, Milanović has promised to move the country on from its wartime past.

Grabar-Kitarović, who attracted international attention during Croatia’s run to the World Cup final in Russia in 2018 by dancing in front of Vladimir Putin when her country’s team beat Russia, told reporters she was left feeling “bullied” by much of the domestic media attention she had received during her time in office.