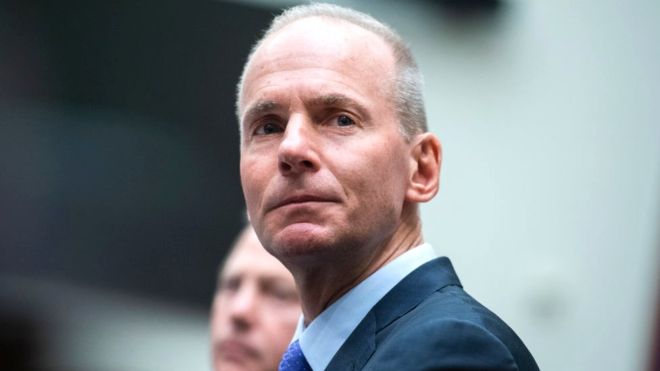 Mr Muilenburg will not receive severance pay, according to a regulatory filing by Boeing.

Boeing fired Mr Muilenburg in December to restore confidence in the firm after two deadly crashes involving its 737 Max plane.

It said that Mr Muilenburg received the benefits he was "contractually entitled to" and that no annual bonus was paid.

In addition to the $62m in compensation and pension benefits, Mr Muilenburg holds stock options that would have been worth $18.5m at the closing price on Friday.

The planemaker also confirmed that David Calhoun, its new boss, could receive a bonus of $7m, subject to whether or not he can get the 737 Max flying safely again.

Boeing said it was confident that Mr Calhoun was the right person "to strengthen Boeing's safety culture, improve transparency and rebuild trust".

He was appointed as chief executive and president of Boeing having served on the firm's board since 2009.

The figures were disclosed during a difficult week for the planemaker, when internal messages were released that raised further questions over the jet's safety.

An employee said the plane was "designed by clowns" in one of the communications.

Boeing has faced scrutiny since the fatal crashes of two 737 Max planes, which killed nearly 350 people. It is facing multiple investigations following the crashes in Indonesia and Ethiopia.

Boeing also faces a fine from US regulators worth $5.4m for "knowingly" installing faulty parts on its 737 Max planes.

The fine announced by the Federal Aviation Administration on Friday is not connected to the software system that investigators have implicated in the crashes.

The planemaker has the right to dispute the fine, which follows a previous $3.9m fine the FAA proposed against the US aerospace giant.