Shanghai suspends all ties with Prague in spat over Taiwan 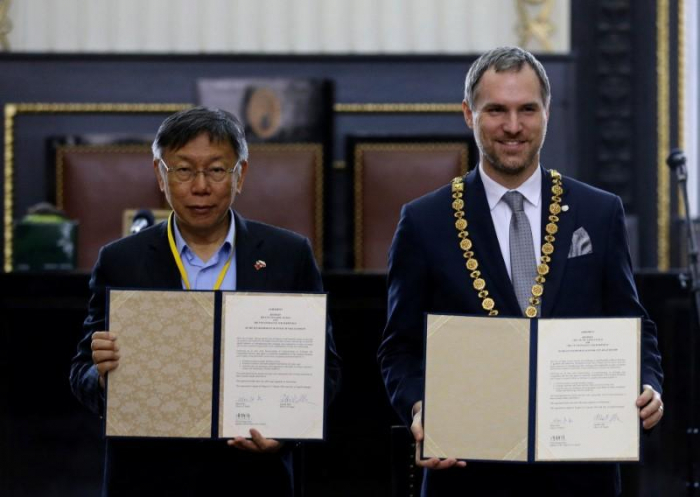 The Shanghai city government said on Tuesday it was suspending official contact with Prague after the Czech capital signed a sister-city agreement with Taiwan’s capital, Taipei, instead of Beijing.

While Czech President Milos Zeman has pushed ties with China, he has become more critical after promised Chinese investment has failed to materialize. On Sunday, he said he would not attend a summit in China in April.

Prague’s government has forged its own path, including Mayor Zdenek Hrib’s refusal to eject a Taiwanese diplomat from a conference at the demand of a Chinese official. He also flew the Tibetan flag at City Hall.

Taiwan is China’s most sensitive diplomatic issue, as the island is claimed by Beijing as a renegade province. China has stepped up pressure on foreign governments to fall in line with accepting its claims.

The government of financial hub Shanghai said Prague’s government had made many missteps on core issues such as Taiwan.

They have “wantonly interfered in China’s internal politics and publicly challenged the ‘one China’ principle,” it said in a statement, adding its “stern opposition” to these moves.

As a result, Shanghai was immediately suspending all official interactions with Prague, it said.

This decision comes after Prague’s city council upset China in October by canceling a partnership agreement with Beijing that required it to commit to the “one China” principle.

“We are not dealing with China’s internal politics here in Prague since the cancellation of a partnership with Beijing. The one-China topic should be left for the Foreign Ministry,” Hrib said in a statement on Tuesday.

The Czech Foreign Ministry said city partnerships were decided by elected municipal politicians, not the state.

Taiwanese President Tsai Ing-wen won re-election by a landslide last weekend in a campaign in which she routinely denounced China’s efforts at intimidation and said Taiwan would not be bullied into submission.

Taipei Mayor Ko is no supporter of Taiwan’s formal independence. He visited Shanghai last year and has said that the two sides of the Taiwan Strait are part of “one family.

Ko is widely expected to stand for the presidency in the 2024 elections.