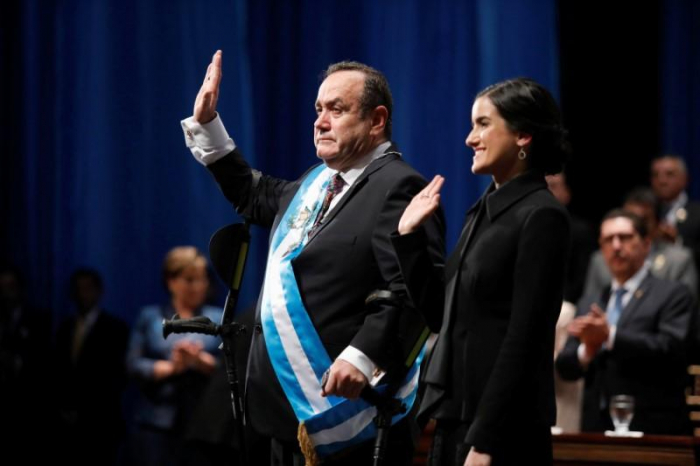 Guatemala swore in President Alejandro Giammattei on Tuesday in a ceremony tainted by long delays blamed on political jostling and maneuvers by outgoing officials to avoid arrest, a reminder of the deep levels of political corruption plaguing the country.

The 63-year-old Giammattei, a former surgeon and ex-prison chief, apologized on Twitter to guests and Guatemalans for the five-hour wait beyond the scheduled time, but said the problems were out of the hands of his government.

Giammattei, who won the top office on his fourth attempt and uses crutches because of multiple sclerosis, tweeted that change had started. He took to the stage to a Spanish version of Frank Sinatra’s “I did it my way.”

Giammattei’s strategy to uproot corruption from political life will be closely watched after his predecessor, fellow conservative Jimmy Morales, chased out a U.N.-backed anti-corruption body investigating him and his family.

Most right-of center politicians, including Giammattei, came to see the corruption body, known as CICIG, as an unacceptable violation on Guatemala’s sovereignty. Giammattei says he will create a national anti-corruption force instead.

Jostling in Congress, where new and returning lawmakers were also sworn in on Tuesday, appeared to have slowed down the day’s proceedings. One politician recovering from an operation arrived late in a wheelchair and was carried out on a stretcher.

The politician, Herber Melgar Padilla, is under investigation for money laundering, which he denies. He could have lost his immunity from prosecution if he did not take his oath on Tuesday. His vote was also important to help conservative parties retain control of the house leadership.

Outgoing Morales is taking up a post in Central America’s regional parliament later on Tuesday, which will extend the protection from prosecution he has been entitled to as president. Morales is under investigation for alleged campaign finance crimes, which he denies.

Riot police gathered outside the regional parliament headquarters, where anti-corruption protesters shouted insults as politicians arrived to be sworn in.

Ross and Wolf earlier met with Giammattei and members of his cabinet to discuss immigration and border security - the most pressing issues on the bilateral agenda with the Trump administration.

Giammattei is under pressure from Washington to expand an agreement with the United States forged by Morales that makes Guatemala a buffer zone to reduce U.S. asylum claims.