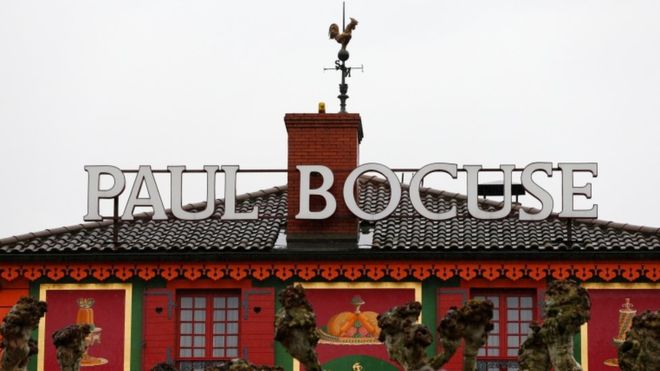 But the Michelin Guide said the food quality was "no longer at the level of three stars". It will now have two.

The family of Bocuse - a culinary icon in France - said they were "upset" by the decision.

The Michelin Guide's head Gwendal Poullenec visited the restaurant near Lyon on Thursday to deliver the news.

"Obviously, there was a lot of emotion," he told the Washington Post in an interview, adding that there had been "a variation in the level of the cuisine, but it remains excellent."

Bocuse, who died in 2018 aged 91, was a household name in France. He was the head of an international food empire and known as the "pope" of cooking in his home country.

The restaurant's loss of a highly coveted third star has shocked France and drawn confusion and outrage from food critics around the world.

"Michelin cannot be so stupid," he said on radio station FranceInfo, arguing that critics agreed the quality of food had improved since Bocuse's death.

"Today its discredit is total, the institution is dead," he said of the Michelin Guide.

This is the most recent controversy surrounding the Michelin Guide, which has made efforts in recent years to stave off criticism that is biased towards French cuisine and overvalues formal dining.

In December, French chef Marc Veyrat lost his court case against the guide after it stripped him of a Michelin star.

Bocuse died in a room above the restaurant on 20 January 2018.

About 1,000 people attended his funeral, with more mourners watching the ceremony on big screens set up outside the cathedral. French President Emmanuel Macron at the time described him as the "incarnation of French cuisine".

"Although upset by the inspectors' judgment, there is one thing that we never want to lose, it is the soul of Mr Paul," the restaurant and Bocuse's family said in a statement.

"From Collonges and from the bottom of our hearts, we will continue to bring the Sacred Fire to life with audacity, enthusiasm, excellence and a certain form of freedom."