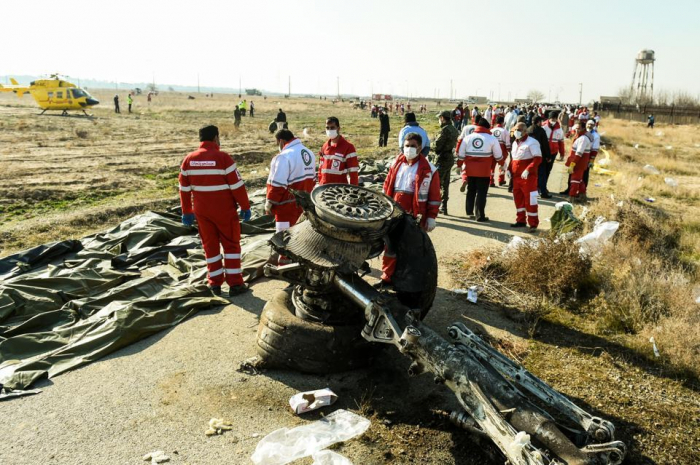 Flight data recorders of the Ukrainian passenger plane, which was accidentally downed outside Tehran, will be sent to Kiev, Hassan Rezaifar, head of the accidents investigation commission at Iran’s Civil Aviation Organization, said on Saturday, AzVision.az reports citing TASS.

"We have once more consulted with Ukrainian experts and [confirmed] that it is impossible to decode black boxes in Iran" he said quoted as saying by Tasnim news agency.

"At the request of the Ukrainian authorities, the black boxes of the Ukrainian downed jet will not be read in Iran, but instead will be transferred to Ukraine for analysis and reading," the official added.

Rezaifar noted that "with the use of the expertise of the countries of France, Canada and America we will try to read the [flight data recorders] in Kiev."

"If this effort is unsuccessful then the black box will be sent to France," he added.

On Friday, the office of Ukraine’s prosecutor general filed another request to Iran asking to hand Kiev the flight data recorders of the downed plane. Ukraine had submitted a previous request to Iran on January 15. On the same day, head of the Kiev Research Institute of Forensic Studies Alexander Ruvin said that an international team of experts would start reading the black boxes in Kiev on January 20.

On January 8, a Boeing-737 of the Ukrainian International Airlines bound for Kiev crashed minutes after takeoff from Tehran’s Imam Khomeini Airport. The crash killed all 176 people on board - citizens of Afghanistan, Germany, Iran, Canada and Ukraine and also British and Swedish subjects. On January 11, Iran’s Armed Forces General Staff released a statement admitting the plane had been mistakenly shot down. According to Iranian Brigadier-General Amir-Ali Hajizadeh, the plane was misidentified as a cruise missile by the air defense force.