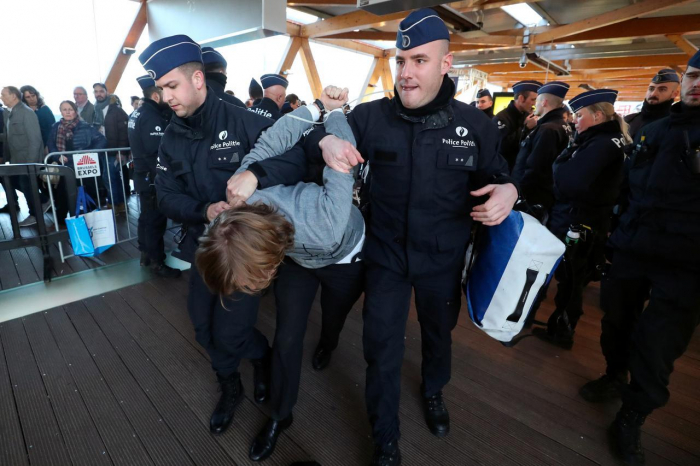 Police detained 185 protesters in central Brussels on Saturday after the environmental protest group Extinction Rebellion staged demonstrations at a car show in protest at the auto industry’s role in CO2 emissions that cause climate change, Azvision.az reports citing Reuters.

The protest came only days after the European Commission unveiled ideas on how to finance its flagship Green Deal project that aims to make the European Union a CO2 emissions-neutral area by 2050, in part through the transformation of the car industry.

A member and former spokesman for the group, Christophe Meierhans, said Extinction Rebellion targeted the car industry because it told “a lot of lies in order to sell more cars”.

One protester, his face covered with black paint, chanted “Shell kills” referring to the oil company Royal Dutch Shell before lying down in front of the company’s stall, while other protesters gathered around wearing face masks with the company’s logo.

The protesters were quickly taken away by police and the show’s security personnel briefly blocked access to the area.

Later, demonstrators carried out a “die-in” outside the show’s entrance and were also removed by police without resisting arrest.

The show’s organizers said in a statement they expected 500,000 visitors to visit the 10-day car show, the largest of its kind in the country.