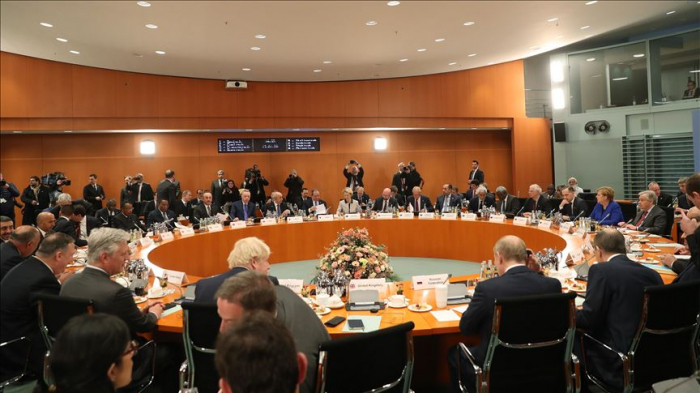 At its conclusion, Sunday’s international conference in Berlin on finding peace in Libya stressed its commitment to implementing a fragile cease-fire in the North African country, AzVision.az reports citing Anadolu Agency.

“We call on all parties concerned to redouble their efforts for a sustained suspension of hostilities, de-escalation and a permanent ceasefire,” said the conference’s final declaration.

“We call for the termination of all military movements by, or in direct support of, the conflict parties, in and over the entire territory of Libya, starting from the beginning of the ceasefire process,” it added.

The participants also agreed to establish an International Follow-Up Committee (IFC) with the participation of all countries and international organizations that attended the conference “in order to maintain coordination in the aftermath of the Berlin Conference on Libya, under the aegis of the United Nations.”

The declaration also welcomed nominations from warring sides for the military "5+5 Committee" proposed by the conference to continue cease-fire talks.

All conference participants declared that “they will refrain from any further military deployments or operations as long as the truce is respected.”

The declaration also stated that the participants are committed to Libya’s sovereignty, independence, territorial integrity, and national unity.

“Only a Libyan-led and Libyan-owned political process can end the conflict and bring lasting peace,” it added about the longstanding conflict.

Since the ouster of late ruler Muammar Gaddafi in 2011, two seats of power have emerged in Libya: warlord Khalifa Haftar’s in eastern Libya supported mainly by Egypt and the UAE, and the Government of National Accord (GNA) in Tripoli, which enjoys UN and international recognition.

Libya’s internationally recognized government in the capital Tripoli has been under attack by Haftar since last April, and fighting over the last nine months has killed more than 1,000 people.