Hallmark CEO steps down after conservative backlash to same-sex ads 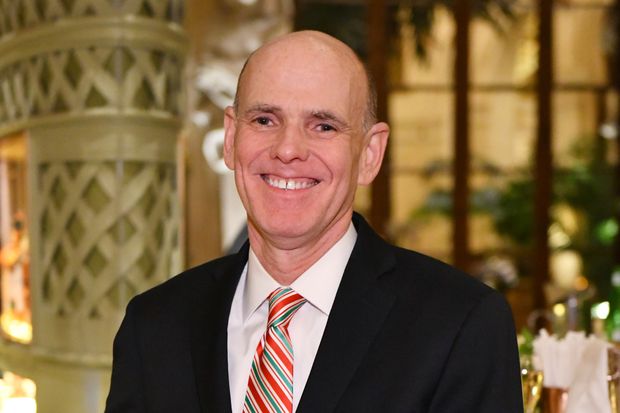 The president and CEO of Hallmark's media brands is stepping down amid a conservative Christian backlash to an ad showing a same-sex couple.

Bill Abbott, the now-former head of Crown Media, which operates the Hallmark Channel, is leaving the company one month after the channel aired, then removed, four Zola ads showing two married women kissing.

Mr Abbott — after more than a decade leading the company — headed the cable network as well as Hallmark Movies & Mysteries, Hallmark Drama and Hallmark Publishing.

Mike Perry, CEO of Crown Media's parent company Hallmark Cards Inc, did not cite the ad controversy as the reason for Mr Abbott's departure and claimed that competition from other networks and streaming services has pressured the company to "find relevant new ways to grow our business and continue to produce high-quality programming that resonates with our growing audience".

The ads for the wedding registry company, which first appeared on the network in December, show a variety of couples at the altar, including two women. One ad exclusively features that couple.

A campaign from One Million Moms urged that the network pull the ad, which aired during the 2019 holiday season, saying that "parents need to know they could now come face-to-face with the [LGBT+] agenda when they sit down to watch the Hallmark Channel".

The organisation, which operates under the umbrella of right-wing fundamentalist Christian group the American Family Association, said that "family entertainment is not the outlet in which to be politically correct by forcing tolerance and acceptance of homosexuality — a sinful lifestyle that Scripture clearly deems as wrong".

In statements, representatives with the network — which often airs family-friendly romantic comedies and dramas with mostly white casts — was open to airing more diverse stories that reflected marriage equality and LGBT+ characters.

In its decision to pull the commercial, the company said the "debate surrounding these commercials on all sides was distracting from the purpose of our network, which is to provide entertainment value".

But Mr Perry later reversed that decision and apologised, saying that the Crown Media team "has been agonizing over this decision as we've seen the hurt it has unintentionally caused ... Said simply, they believe this was the wrong decision."

The channel has seen relatively strong growth over the last several years while also receiving complaints for its lack of diversity in its programming.

In 2019, the channel promoted two Jewish holiday movies, though both of them featured Jewish characters woven into Christmas movies, with titles that don't mention Hanukkah or imply any Jewish connection.

Mr Perry said: "I have tremendous confidence in the Crown Media management team, and with this team in place, I will begin a search for Bill's replacement."