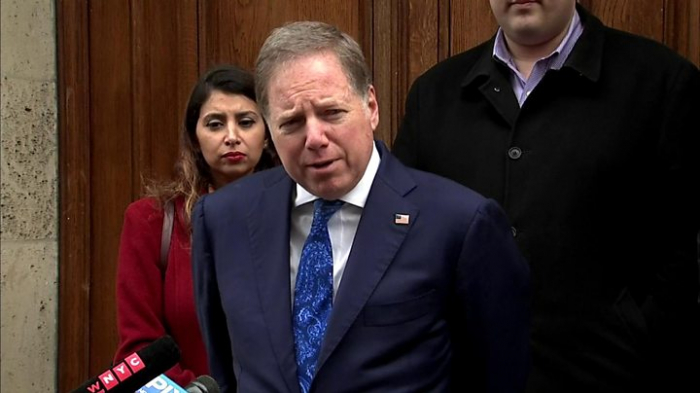 Lawyers representing alleged victims of convicted sex offender Jeffrey Epstein have urged Prince Andrew to co-operate with an inquiry into the financier.

Lisa Bloom said Epstein's accusers were "outraged" by the Duke of York not assisting the US authorities.

It comes after the prosecutor in charge of the US investigation said the duke had provided "zero co-operation".

The duke has said he did not witness or suspect any suspicious behaviour during visits to Epstein's homes.

He has come under fire for his friendship with the US financier - a convicted sex offender who took his own life in a jail cell in August, aged 66, while awaiting trial on sex trafficking and conspiracy charges.

The duke told the BBC last November that he was willing to help the authorities into the investigation of Epstein.

However, US attorney Geoffrey Berman said prosecutors and the FBI have received no reply after contacting the duke's lawyers.

What have the US lawyers said?

Ms Bloom, a US lawyer who represents five women who say they were abused by Epstein, said the duke should "do the right thing".

She told BBC Newsnight: "I'm glad that Geoffrey Berman has gone public to try to embarrass Prince Andrew, who made one statement and then behind closed doors is doing something very different.

"The five Epstein victims who I represent are outraged and disappointed at Prince Andrew's behaviour here."

Buckingham Palace said the prince's legal team was dealing with the issue and it would not be commenting further.

Ms Bloom added: "If Prince Andrew truly has done nothing wrong then it's incumbent upon him to go and speak to the FBI at a time that's convenient for him and say what he knows.

"Perhaps he can help bring other people to justice."

Another US lawyer representing some of Epstein's accusers, Gloria Allred, said she had sent a letter to Prince Andrew's home urging him to co-operate but hadn't received a response.

She told BBC Radio 4's Today programme: "No response is the same as zero co-operation. This is ridiculous. It's just not acceptable."

She added: "Prince Andrew has a moral obligation to volunteer to speak to law enforcement - that's what he said he would do."