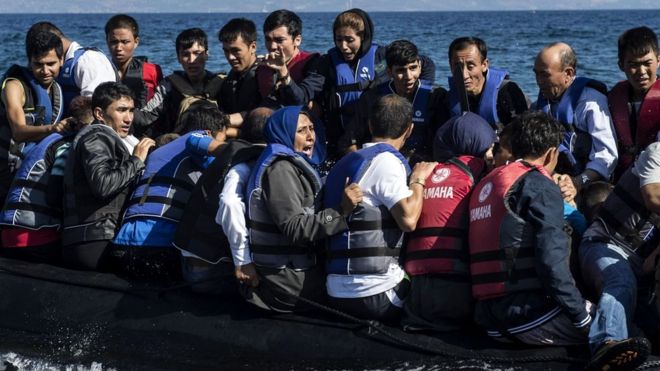 The barrier, possibly made of netting and equipped with flashing lights, will cover 1.7 miles (2.7km) and rise above water near the Greek island of Lesbos.

Greece's defence ministry said the project would be an emergency measure.

Many are fleeing violence and persecution in their countries. The majority of arrivals are from Afghanistan and Syria, according to the United Nations.

Last week, strikes and protests took place on the Greek islands of Lesbos, Samos and Chios over the government's handling of migrant arrivals.

This latest initiative is "aimed at containing the increasing inflows of migrants" on islands such as Lesbos, the defence ministry said.

It said the netted barrier needed to be 1.1 metres tall, with about 50cm (20in) rising above the sea's surface. It would be located north of Lesbos and should include lights and reflectors to make it visible at night.

The government has called on vendors to submit designs for the installation.

"The invitation for floating barriers is [a move] in the right direction," Greece's Defence Minister Nikos Panagiotopoulos told radio station Skai, adding: "We will see what... its effect as a deterrent will be in practice."

Barriers that rise above sea level will make it hard for small boats to pass, and nets could be problematic for propeller-driven vessels.

The Greek migration ministry also said on Thursday that it was introducing additional shifts for staff to process a build-up of more than 100,000 asylum applications.

Migrant arrivals have been rising in Greece, and camps on several of its islands are overcrowded.

At Moria, the largest camp on the island of Lesbos, there are more than 19,000 asylum-seekers living at a facility with capacity for 2,840.

Greece's Ministry for Citizen Protection says there are currently around 7,200 migrants living in the camp on Samos, which was designed for just 700.

The local population of Samos town is around 6,500.

Conditions on the islands have led to tension between migrants and locals. Last week, thousands of Greek protesters demonstrated on Lesbos, Samos and Chios over the government's handling of migrants arriving from Turkey.

Banners on the Lesbos municipal theatre proclaimed: "We want our islands back."

Another read: "No more prisons for human souls in the North Aegean."