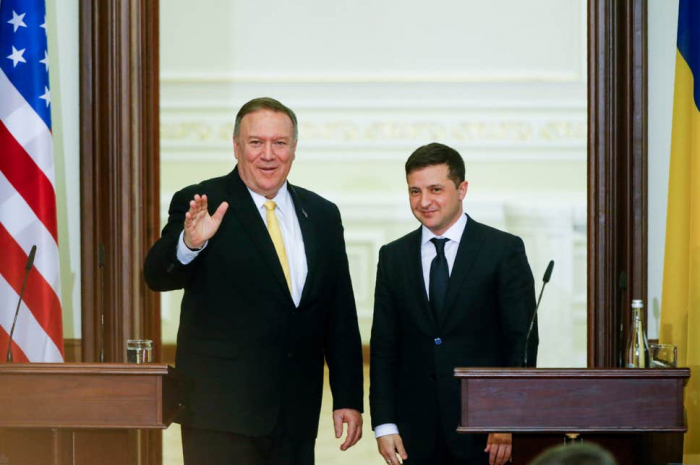 If there was any tension, the two men did their best not to show it — with smiles, warm words and firm denials dominating a press conference between US secretary of state Mike Pompeo and Ukrainian president Volodymyr Zelensky.

No, there was no implied quid-pro-quo, said Mr Pompeo; there was no push to make Ukraine’s new leader open an investigation into Joe Biden in exchange for a White House visit and/or military assistance.

No, there was no way impeachment had sullied the relations between Ukraine and the United States, said Mr Zelensky. If anything, the “contrary” was true: “The Unites States really supports and defends us.”

It was a time for deeds not words, the men agreed.

Yet apart from the warm words, president Donald Trump’s chief envoy offered little in the way of new commitments. There would, for example, be no offer of a visit to the White House in the foreseeable future. Some had speculated this might be offered in a bid to reduce Mr Trump’s impeachment pains in Washington.

“We will find the right time, an important opportunity,” the secretary of state said. “We want to make sure it happens when there is substantial progress.”

Mr Zelensky said that he would be “prepared to fly tomorrow” given the opportunity.

Behind the warm facade, the Ukrainian leader is all too aware of the prevailing difficulties in relations. Not only has Ukraine become a subject of a US domestic tug-of-war — and now largely mentioned in negative terms such as corruption — Donald Trump is much less forward in support of Ukraine in its conflict with Russia than Barack Obama ever was.

Much of Mr Trump's foreign policy, from Syria to NATO, has aligned with Moscow. His withholding of $391m million of military assistance to Ukraine, apparently in exchange for probing conspiracy theories into rival Joe Biden, is meanwhile at the centre of a 4 month long impeachment inquiry. Today's visit by Mr Pompeo was the first visit by a top Trump official to Ukraine since the investigation began.

Upon being questioned on Ukraine, the secretary of state alleged to have snapped “Do you think Americans care about Ukraine?”, using an expletive in the sentence. He later accused the journalist of lying but did not dispute the substance of what she reported.

But even if that embarrassing moment was broached in private, it was kept well away from the press packs in Kiev today.