Mila: 'No regrets' for French teen targeted for criticising Islam 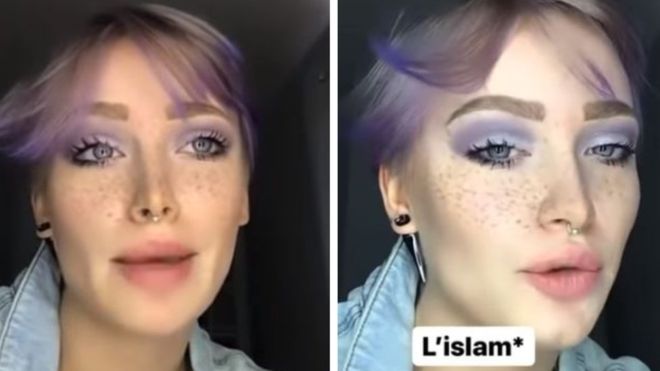 A teenager has sparked a national debate about blasphemy in France after an Instagram post calling Islam a "religion of hate".

Mila, 16, posted her comments online after receiving homophobic abuse from a Muslim commenter.

She received death threats and has not attended school since.

But Mila has refused to back down, saying in her first television interview that she "wanted to blaspheme".

The post has sparked a huge debate in France over freedom of speech. The country has no national blasphemy laws and has a rigidly secular constitution.

Police initially opened two investigations: the first into whether Mila was guilty of hate speech, and the second into her online attackers. They have since dropped the hate speech case as Mila was expressing a personal opinion on religion and not targeting individuals.

What did Mila say?

Appearing on the Quotidien programme on the TMC channel, Mila apologised for insulting people who practise their religion "in peace" and said she regretted the "vulgarity" of her words and their spread online.

But she defended her remarks. "I have absolutely no regrets about what I said, it was really my thought," she told the interviewer.

Mina said her life was "clearly on hold" amid the controversy. She had to leave school because of the threats against her, saying she could have been "burned with acid, hit, stripped naked in public or buried alive".

On Monday, education minister Jean-Michel Blanquer said that authorities were trying to "return her to school peacefully so that she can have a normal life".

How did the controversy start?
The controversy began on 18 January, after Mila did a live broadcast on her Instagram account. After speaking about her sexuality she was called a "dirty lesbian" by a Muslim commenter.

In response, Mila posted an attack on Islam. "I hate religion. The Koran is a religion of hate," she said, before using stronger words to attack Islam.

"I am not racist. You cannot be racist towards a religion. I said what I thought, you're not going to make me regret it."

Critics said her comments were offensive. Some sent her death threats, and others posted her personal information online. The head of the French Council of the Muslim Faith, Mohammed Moussaoui, said nothing justified death threats no matter how serious her remarks.

Supporters defended her right to attack Islam, and the hashtag #JeSuisMila (I am Mila) started trending in France. Opponents hit back with the hashtag #JeNeSuisPasMila.

French justice minister Nicole Belloubet waded into the controversy, saying that death threats against the teenager were "unacceptable".

However, Ms Belloubet herself was criticised after arguing that an attack on religion was "an attack on freedom of conscience". French Senator Laurence Rossignol gave Ms Belloubet "0/20 in constitutional law", saying that in France "it is forbidden to insult the followers of a religion but one can insult a religion, its figures, its symbols". Ms Belloubet later said her comments had been "clumsy".

Mila's cause has been embraced by the far right. National Rally leader Marine Le Pen said Mila had "more courage than the entire political class in power for the past 30 years".

In October, French President Emmanuel Macron warned against "stigmatising" Muslims or linking Islam with the fight against terrorism.