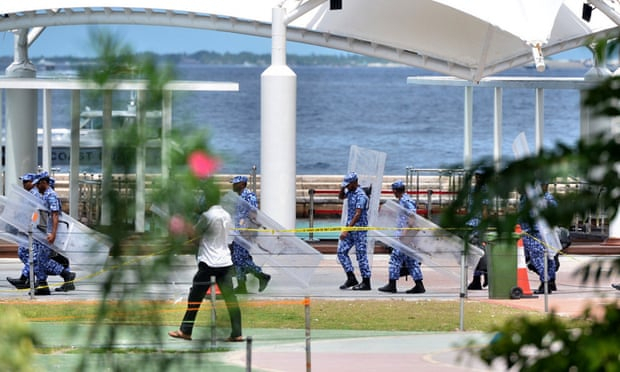 Three people including an Australian man have been stabbed in the Maldives in an attack claimed by Islamic State sympathisers, the Guardian reports.

Police in the South Asian archipelago said the Australian, 44, and two Chinese nationals were stabbed by “suspected extremists” between 7pm and 8pm on Tuesday on Hulhimalé, an island near the capital Male.

Three people had been arrested in relation to the attack on Thursday, police said.

“The Maldives Police Service is working closely with all relevant stakeholders in this matter, and assures the public of our continued efforts to ensure the safety and security of those in Maldives,” said in a statement.

A radical group claiming to be affiliated with Isis took responsibility for the attack in a video posted online. It features three masked men accusing the Maldivian government being run by infidels, claiming the attacks are meant to hurt the country’s vital tourism industry and warning more attacks were coming. Police said they were working to confirm the veracity of the footage.

One video being shared online shows a man in a blue shirt on a bike riding to hospital with a bloody back.

The ABC reported that man in the video is Australian and his injuries are “not serious.”

More people left the Maldives, a nation of about 340,000 Sunni Muslims, to join Isis and other extremist groups than almost any other country per-capita. The official figure of those who left is 173 “but the real number could be anywhere between 200 and 300”, said Azim Zahir, an expert in south Asian extremist movements at the University of Western Australia.

Around 59 Maldivian women suspected of links to Isis and their children are currently detained in north-eastern Syria, he said, including at least 28 women and children, who the authorities were working to return.

Up to 160 Maldivian men are being held as suspected militants in Syrian detention camps, according to the speaker of the country’s parliament, Mohamed Nasheed.

At least one man who travelled to Syria was known to have returned to the Maldives and was at large, Zahir said. “Many others were stopped before they reached Syria and send back [and] they are free too.”

Best known overseas as a honeymoon destination, the country has been struggling to contain extremist elements and launched a crackdown in October, arresting a man alleged to be a key Isis recruiter, Muhammad Ameen.

Several others linked to Ameen, 35, have been detained in past months and their children have been taken into state custody – including the child bride of one of the men. The wave of arrests has led to threats of retaliation.

“Tuesday’s attack was very scary because it’s a soft yet strategic target – ordinary foreigners or tourists – and required no sophisticated planning or weaponry,” Zahir said.

The same network of extremists were implicated in an attack on tourists in 2007.

The Australian department of foreign affairs said it was attempting to contact an Australian man hospitalised in the Maldives but would not comment further citing privacy reasons.