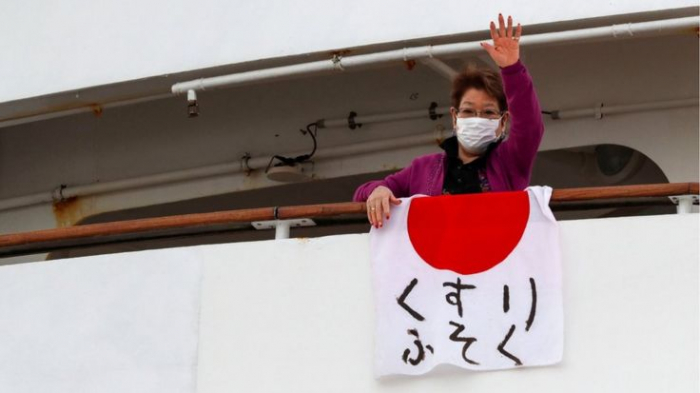 Another 41 people on a cruise ship off the coast of Japan have tested positive for the new coronavirus, bringing the total number of cases on board to 61.

Some 3,700 people are on board the Diamond Princess, which is quarantined in Yokohama for at least two weeks.

The checks began after an 80-year-old Hong Kong man who had been on the ship last month fell ill with the virus.

He boarded the luxury cruise liner in Yokohama on 20 January and disembarked in Hong Kong on 25 January.

A separate cruise ship - the World Dream - has been quarantined in Hong Kong after eight former passengers caught the virus. It has around 3,600 people on board, but none have tested positive so far.

Another ship, the Royal Caribbean's Anthem of the Seas, has docked in the city of Bayonne in the US state of New Jersey. Footage on US media showed medical professionals taking some passengers off the ship on stretchers.

Bayonne Mayor Jimmy Davis said in a statement that about two dozen passengers were screened on Friday morning and that four were taken to a hospital for further tests.

"I was advised CDC [Centers for Disease Control and Prevention] considers this a 'Below Low Risk' situation. All other passengers released with no action needed."

Royal Caribbean also said it was "participating in elevated levels of guest screening to check the spread of coronavirus", and that they were "closely monitoring developments... and have rigorous medical protocols in place on board our ships".

And a British-American owned liner, the Westerdam, has been turned away by Japan even though it has not reported any cases of the virus.

The new cases on board the Diamond Princess bring Japan's number of confirmed cases to 86, the second highest figure after China.

"Today they will be sent to hospitals in several prefectures, and we are now preparing for that," Japan's Health Minister Katsunobu Kato said.

One of those tested positive and now moved off board is Briton Alan Steel, who was on honeymoon with his wife Wendy.

With the quarantine due to last until 19 February, there has also been concern over supplies of normal medicine to the ship.

One passenger has been waving a Japanese flag with the message "shortage of medicine".

A Japanese TV crew on the shore responded with a banner asking: "What medicine?"

Twenty passengers diagnosed earlier have already been taken to hospitals.

The 61 confirmed patients are from:

Around half the guests are from Japan, the tour company said, while the UK government said there were 78 British citizens on board.

The company said it was providing satellite TV, films, newspapers, room service, and free phone calls and internet to all guests.