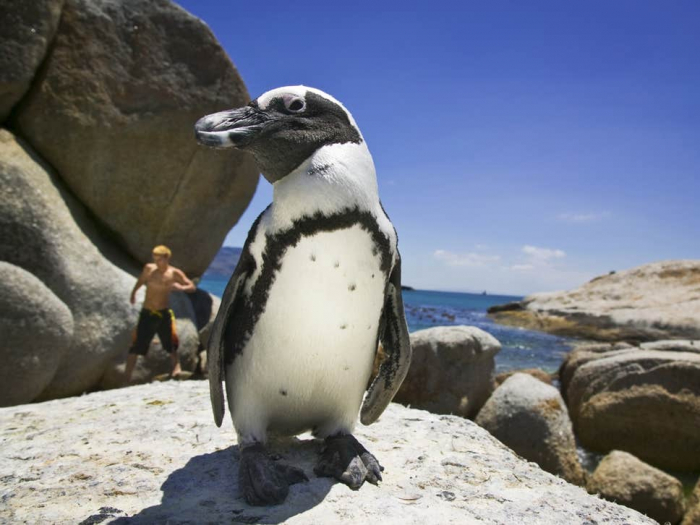 Penguin small talk follows some of the same principles as chatter amongst people, scientists have found.

The flightless birds are known for exhibiting a number of traits shared with humans – including monogamous relationships, same sex partnerships and, according to some studies, prostitution.

Now a new study from the University of Torino has found the animals obey some of the same rules of linguistics as humans.

The animals follow two main laws - that more frequently used words are briefer (Zipf's law of brevity), and longer words are composed of extra but briefer syllables (the Menzerath-Altmann law).

Scientists say this is the first instance of these laws observed outside primates, suggesting an ecological pressure of brevity and efficiency in animal vocalisations.

Information compression is a general principle of human language.

According to the study published in the Biology Letters journal, display songs of the endangered African penguin conform to both Zipf's law of brevity and Menzerath-Altmann law.

The research was led by the Equipe de Neuro-Ethologie Sensorielle of the University of Lyon/Saint-Etienne.

Dr Livio Favaro, of the University of Torino and colleagues, say this is the first evidence of conformity to the universal principles of compression in the vocal sequences of a non-primate species.

Researchers recorded and analysed 590 ecstatic display songs from 28 adult African penguins, belonging to three different colonies in Italian zoos, during the breeding periods in 2016 and 2017.

They found the words used most often by the flightless birds were the shortest, while the longest words were made up of extra but shorter syllables.

The study sets out: "Our results demonstrate that ecstatic display songs of the African penguin follow Zipf's Law of Brevity and the Menzerath-Altmann Law.

"This is the first compelling evidence for conformity to linguistic laws in vocal sequences of a non-primate species.

"As predicted, we found that the duration of the syllables was inversely correlated with the frequency of occurrence."

The authors add: "We suggest that relationships between element duration, frequency of use and song size are mainly a consequence of vocal production constraints interacting with selective pressures for intersexual mate choice and territorial defence in dense colonies.

"Importantly, our results suggest for the first time that information compression can coexist with other sources of selection in a non-primate species with a small and relatively fixed vocal system."