Cables 1,000 times faster than current internet wires could be created after major breakthrough 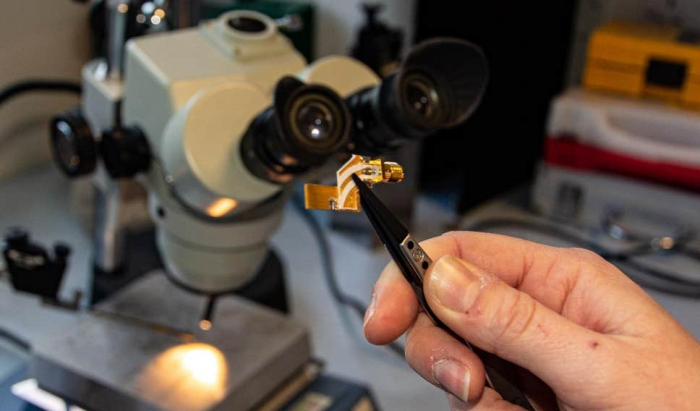 Data could be transmitted a thousand times faster than current internet cables after a major breakthrough, scientists have said.

The lasers could be used to vastly speed up data communications, according to the researchers behind the study, which is published today in the journal Nature Communications.

The study saw researchers make a breakthrough in the control of terahertz quantum cascade lasers, which they say could be used to transmit data at a speed of 100 gigabits. Current – very fast – ethernet connections work at 100 megabits a second, a thousand times less quick.

The specific kind of lasers are different because they send out light in the terahertz range of the electromagnetic spectrum, which is largely used to analyse chemicals. But by turning them to use to send data, they could provide much faster connections for research facilities, hospitals, satellite communications or any other situations where very fast network connections are required.

To be used to send to data, the lasers need to be switched off about 100 billion times every second. That requires precise control, and engineers have so far been unable to do it.

Now researchers think they have found a way of controlling that very fast modulation, using sound and light.

"This is exciting research," said John Cunningham, Professor of Nanoelectronics at Leeds. "At the moment, the system for modulating a quantum cascade laser is electrically driven - but that system has limitations.

"Ironically, the same electronics that delivers the modulation usually puts a brake on the speed of the modulation. The mechanism we are developing relies instead on acoustic waves."

When an electron passes through the optical part of the laser, it travels through a host of "quantum wells" that throw out a pulse of light energy. An electron can emit a number of those photons, and that is controlled – using soundwaves to vibrate those quantum wells – in the new experiment.

"Essentially, what we did was use the acoustic wave to shake the intricate electronic states inside the quantum cascade laser," said Tony Kent, Professor of Physics at Nottingham. "We could then see that its terahertz light output was being altered by the acoustic wave."

The research is not perfect, and more control is still needed before the lasers could be used reliably to transmit data. But with further work they could lead to major breakthroughs in transmitting data.

"We did not reach a situation where we could stop and start the flow completely, but we were able to control the light output by a few percent, which is a great start," said Professor Cunningham.

"We believe that with further refinement, we will be able to develop a new mechanism for complete control of the photon emissions from the laser, and perhaps even integrate structures generating sound with the terahertz laser, so that no external sound source is needed."