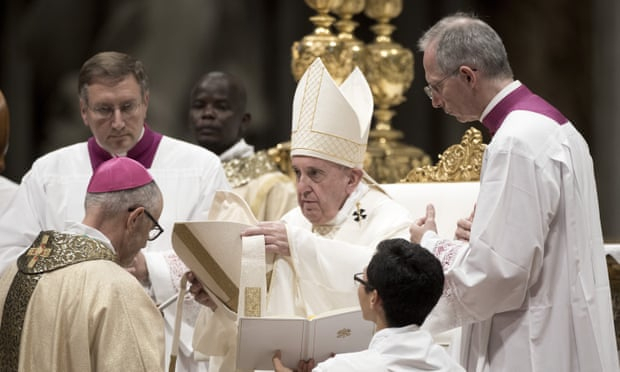 Pope Francis has decided against opening up the Roman Catholic priesthood to married men – a move which will please traditionalists but dismay those who argue that easing the celibacy rule would tackle a shortage of clerics.

Instead, an “apostolic exhortation” from the pontiff has focused on environmental damage after bishops from the Amazon highlighted the destruction of the region’s rainforests and exploitation of Indigenous people at a Vatican summit last year.

Beloved Amazon, the papal missive, does not refer to a call from the Amazon bishops to allow the ordination of married men. The issue has become the latest point of friction between conservatives and reformers within the church, with divisions thrown into sharp relief when Francis’s predecessor, Benedict XVI, publicly declared his opposition to any changes to the 1,000-year-old tradition of celibacy in the Roman Catholic priesthood.

Instead, Francis urged bishops to pray for an increase in priestly vocations and suggested more missionaries be sent to remote communities where Catholics can go for long periods without receiving mass.

“This urgent need leads me to urge all bishops, especially those in Latin America ... to be more generous in encouraging those who display a missionary vocation to opt for the Amazon region,” he wrote.

A statement from the Vatican said: “The Amazon challenges us, the Pope writes, to overcome limited perspectives and not to content ourselves with solutions that address only part of the situation.”

The Amazon synod brought together bishops, Indigenous people and activists from nine countries for a three-week meeting at the Vatican. The synod’s final document called for the ordination of “viri probati” – married men of good standing – – and for an increased role for women in the church.

The issue exploded into the open last month with the publication of a book, From the Depths of our Hearts: Priesthood, Celibacy and the Crisis of the Catholic Church, which included an essay by Benedict. “I cannot keep silent,” the former pope, 92, said in a vigorous defence of clerical celibacy.

Amid furore over the book, Benedict later requested the removal of his name as the co-author with conservative cardinal Robert Sarah of Guinea.

Although any easing of the celibacy rule was expected to be limited to specific circumstances, traditionalists feared it would inevitably lead to an end to the bar on married priests. Some said the proposal was heretical.

Progressives had hoped that Francis would back change, but the pope made his views clear last year when he told reporters: “Personally I think that celibacy is a gift to the church. I would say that I do not agree with allowing optional celibacy, no.”

The papal document defended the rights and legacies of Indigenous people and the environment in the Amazon. Francis said the rights of the poor should be respected, their cultural riches celebrated and the Amazon’s natural beauty and life should be preserved.

The Amazon’s ecological problems should not be separated from social ones, Francis said. He pleaded for justice for marginalised indigenous people forced out of their homes due to illegal deforestation and mining, to the outskirts of cities marked by “an increase of xenophobia, sexual exploitation and human trafficking”.

He added: “The businesses, national or international, which harm the Amazon and fail to respect the right of the original peoples to the land and its boundaries, and to self-determination and prior consent, should be called for what they are: injustice and crime.”

Clare Dixon, of the Catholic aid agency CAFOD, said: “The pope is pointing to the Amazon as a microcosm of the crisis we are facing – with the fires, pollution and displacement we’ve seen in the region showing the deadly interaction of poverty and the destruction of nature.

“But Francis is also imploring us to listen to the wisdom of the people of the Amazon, insisting that we learn from the way they live with the environment rather than in competition with it.”