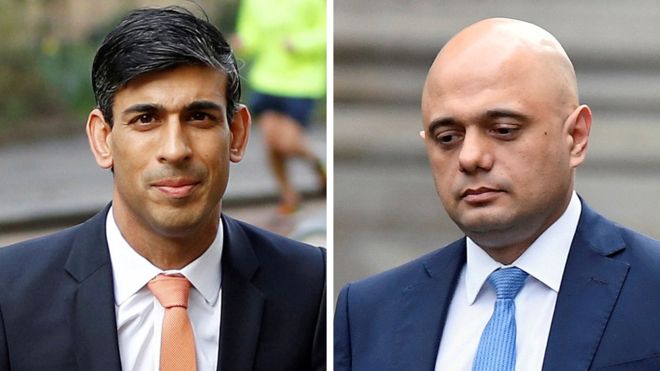 Mr Javid rejected the prime minster's order to fire his team of aides, saying "no self-respecting minister" could accept such a condition.

He has been replaced as chancellor by Chief Secretary to the Treasury Rishi Sunak - who just seven months ago was a junior housing minister.

Mr Javid had been due to deliver his first Budget in four weeks' time.

The former home secretary was appointed chancellor by Mr Johnson when he became prime minister in July.

Mr Javid said his advisers had worked "incredibly hard" and he could not agree to them being replaced.

"I felt I was left with no option but to resign," he said, adding that Mr Sunak and the rest of the government retained his "full support".

Downing Street said there would now be a joint team of economic advisers for both the chancellor and prime minister.

In other reshuffle moves:

He is being replaced at the international development department by Armed Forces minister Anne-Marie Trevelyan.

Mr Johnson is expected to appoint a new minister to oversee the building of the HS2 rail line, final approval for which was given this week.

Arriving at the Treasury, Mr Sunak said he was "delighted to be appointed" chancellor and had "a lot to get on with".

The 39-year-old was educated at Winchester College and Oxford University, after which he went on to found an investment firm.

Mr Sunak became a housing minister in 2018, before being promoted to chief secretary to the Treasury last July.

He stood in for Mr Johnson during the BBC's seven-way debate ahead of December's general election.

Commenting on Mr Javid's resignation, Labour's shadow chancellor John McDonnell said: "This must be a historical record with the government in crisis after just over two months in power.

"Dominic Cummings has clearly won the battle to take absolute control of the Treasury and install his stooge as chancellor."

The relationship between the two next door neighbours in Downing Street is vital in any government.

The relationship between Sajid Javid and Boris Johnson, as individuals, has been OK but there have been clashes between their wider teams.

This is a massive elevation for Rishi Sunak - a year ago he was one of the most junior ministers in the communities department.

A step up to chancellor this quickly is a huge ask.

He has not been tested in any significant way - but was seen as a reliable performer during the general election campaign.

Julian Smith's sacking - weeks after he brokered the deal which restored the power-sharing administration in Stormont - was greeted with shock in Northern Ireland.

The former minister said on Twitter that doing the job had been "the biggest privilege" and he was "extremely grateful" to have been given the chance to serve "this amazing part of our country".