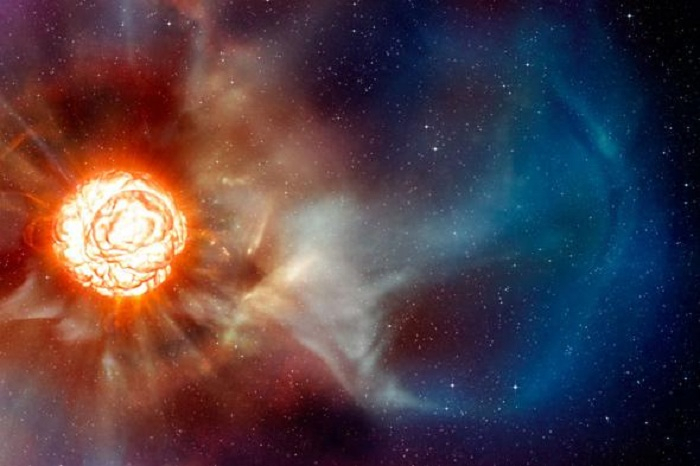 It's not exactly The Big Bang, but it certainly won't be a small one. Seven hundred light years away, a giant star may be about to die.

Named 'Betelgeuse', the red supergiant is nearing the end of its life according to astronomers, and with that could come a giant explosion. The star is one thousand times the radius of the sun, meaning any blast could create a spectacular light show for people on Earth.

Speaking to Euronews' Good Morning Europe programme, Yale University Astrophysicist Darryl Seligman said the size of the star far exceeded what we see in our own solar system.

"It is a very massive star, about twenty times the mass of the sun. Because the core is so hot, it is also much more expansive than the sun, almost 1000 times the radius of the sun. That means if you plopped it down in the solar system instead of the sun, all of the inner planets including the earth would be engulfed by it," he said.

"These huge giant stars burn their elements much quicker than regular stars, so they live for a much shorter amount of time. It is also only 700 light-years away, so it is very close to us, and usually about the tenth brightest star in the sky."

Scientists have been observing the star in recent months, and there's indications it could be on the verge of exploding.

"This is super exciting! One possibility is that Betelgeuse is ending its lifetime, and about to explode as a supernova. This would be incredible because it would give us an up-close live view of a supernova explosion," Seligman said.

However, despite the hotly anticipated light show, scientists have said the collapse of the star could still be some time away.

"It is not clear that this (explosion) will happen. It could be that this is just an overlapping phase of different dimming events, that make Betelgeuse much dimmer. Or it could be that it recently had a lot of mass loss, and that dust is just blocking the light from the star from our view. Either way, it’s very exciting to see what will happen next," Seligman said.

For people on Earth, any explosion of Betelgeuse could appear as bright as the moon in the sky but there are no safety concerns about the dying star due to its spectacular distance away.