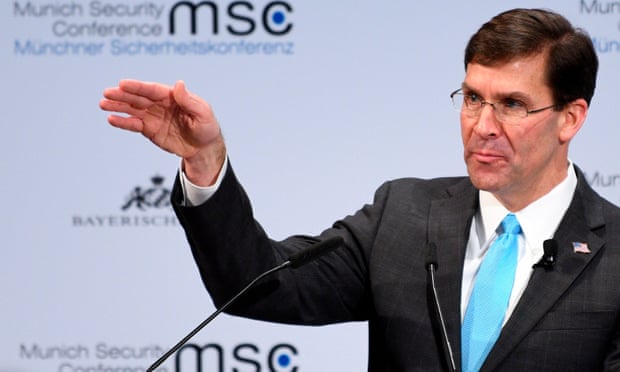 The US defence secretary, Mark Esper, warned that US alliances including the future of Nato were in jeopardy if European countries went ahead with using Chinese Huawei technology in their 5G networks.

Esper also warned future intelligence cooperation would be at risk, as the US would no longer be certain its communications networks were secure.

His remarks at the Munich security conference on Saturday, bolstered by similar warnings from the US secretary of state, Mike Pompeo, remove any doubt that the US sees finding an alternative to Huawei as central to its own security.

Australia’s intelligence and security committee has pulled out of a visit to Britain next month over the fallout from Boris Johnson’s controversial decision to allow Huawei to help build the UK’s 5G network, the Sydney Morning Herald reported. Australia, like the US, has banned Huawei from its communication networks over security concerns.

Esper said he had not looked at the UK’s specific plans to incorporate Huawei into part of its 5G network in detail, and admitted the US was vulnerable to the charge that it had not produced an alternative to Huawei for Europe.

He said he was willing to work with European partners to see if firms such as Ericsson could develop an alternative, and that Washington is currently working to support the development of other options.

“We are encouraging allied and US tech companies to develop alternative 5G solutions and we are working alongside them to test these technologies at our military bases as we speak,” he said.

“Developing our own secure 5G networks will outweigh any perceived gains from partnering with heavily subsidised Chinese providers that answer to party leadership.”

Esper admitted the response to US demands to stay clear of Huawei had been mixed, and said too many countries were focused on short-term economic gain rather than the long-term threat to security.

Lindsey Graham, a US senator close to Donald Trump, also warned the UK risked burning its bridges if it included Huawei technologies in in its 5G network. He said: “The one thing you need to get is that politics back home is about as screwed up as I have ever seen it. What do we agree on? That Huawei technology is a threat to the US and, we really think, to the world order.

“Nancy Pelosi [the Democrat House speaker] and Donald Trump are not going to have many dinners together, but if you ask them about the British purchase of Huawei they will give you the same answer. We are very firm in our commitment – Republicans and Democrats – that if you go down the Huawei road you are going to burn a lot of bridges.”

Both Esper and Pompeo placed the danger of Huawei in the context of a near-existential threat to western freedom posed by China’s rise.

Esper claimed Huawei has become “China’s poster child for its nefarious industrial strategy”, one that is “fuelled by theft and coercion and the exploitation of free-market, private companies and universities”.

He said: “Reliance on Chinese 5G vendors could render our partners’ critical systems vulnerable to disruption, manipulation and espionage. It could also jeopardise our intelligence and communication-sharing capabilities, and by extension it could jeopardise our alliances.

“The Chinese Communist party is heading even faster and further in the wrong direction with more internal repression, more predatory behaviour, more heavy-handedness and a more aggressive military posture. It is essential that the international community wake up to the challenge.”

Pompeo said the Chinese Communist party “represented an enormous risk to the idea of the west”.

He added: “Europeans care deeply about privacy. We cannot allow information to travel across networks if we do not have confidence that it will not be hijacked by the Chinese Communist party. It is just unacceptable and we all know that.”

Pompeo’s speech, in which he warned that Chinese officials were trying to infiltrate US networks, came a day after the German president, Frank-Walter Steinmeier, suggested the US rejected “even the idea of an international community” and was acting “at the expense of neighbours and partners”.

Pompeo hit back, paraphrasing a famous Mark Twain quote: “Those statements don’t reflect reality. I’m happy to report that the death of the transatlantic alliance is grossly overexaggerated.” He pointed out that nearly 40 American congressmen and women were attending the conference in a show of transatlantic unity.

Pompeo said Washington played a key role in keeping Europe safe by reinforcing Nato’s eastern flank on the border with Russia, and had led a multinational effort to defeat Islamic State.

“Is this an America that ‘rejects the international community’?” he asked. “The free west has a brighter future than illiberal alternatives.”

He also warned of the threats posed by Russia’s territorial ambitions, China’s military buildup in the South China Sea and Iran’s “campaigns of terror” through proxy conflicts in the Middle East.

Reflecting US concern over plans to increase European reliance on Russian natural gas through the Nord Stream 2 project, which will pipe Russian gas into Europe, bypassing Ukraine, Pompeo also announced the US would finance energy projects in eastern EU countries.

“The United States – through our International Development Finance Corporation, and with the support of the US Congress – intends to provide up to $1bn in financing to the central and eastern European countries of the Three Seas Initiative.”