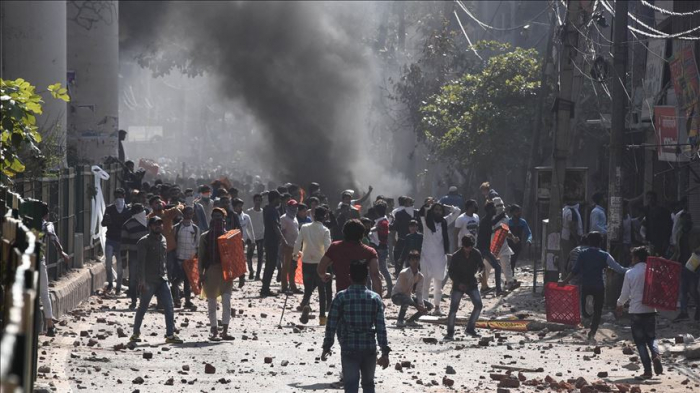 The death toll from protests against India's controversial new citizenship law in the capital New Delhi reached at least 20 people Wednesday, including a policeman, as demonstrations continued for a fourth day, with four new deaths and scores of injuries, AzVision.az reports citing Anadolu Agency.

“Over 100 injured have arrived at the hospital so far and we are still receiving patients,” said Dr. Rajesh Kalra, an additional medical superintendent at Guru Tech Bahadur Hospital, a government-run hospital in the riot-hit district.

Also early Wednesday morning, a shop was set on fire at a tire market in northeast Delhi.

The wounded included reporters, one with a bullet injury and two beaten up by rioters in the district.

The clashes erupted in northeast Delhi on Sunday between pro- and anti-citizenship law protesters and took a violent turn Monday when U.S. President Donald Trump kicked off a two-day trip to India.

The violence resulted in injuries to at least 130 others, including paramilitary and police personnel. This led the government to impose Section 144, which prohibits mass public gatherings, for at least a month in the city, followed by a curfew in the riot-affected area and orders to shoot on sight, not far from where Trump had dinner with his Indian counterpart Tuesday.

The situation started when Kapil Mishra, a leader of the ruling Bharatiya Janata Party (BJP), warned police to clear the protest site ahead of Trump’s official visit. In a video released on Twitter, he is seen giving an ultimatum to police.