Russian newspaper: No arguments can justify mass killings of civilians in Khodjaly 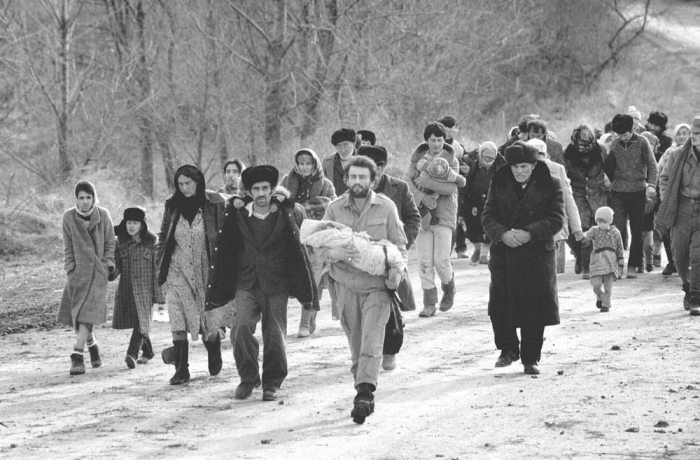 No arguments and references to wartime can justify the mass killings of civilians during the Armenia-Azerbaijan Nagorno-Karabakh conflict, reads an article in Russia’s Novye Izvestia online newspaper, published under the “Atrocities of the Century: February 26 marks the next anniversary of the Khojaly Massacre” title, AzVision.az reports citing Trend.

The author of the article notes that the history of mankind has many sad pages of the fierce cruelty that representatives of one nation showed in relation to another.

“This is, without a doubt, the darkest episode of the military conflict in Nagorno-Karabakh, during which hundreds of residents of the Azerbaijani Khojaly town, including women and children, were killed, wounded and went missing,” says the article.

“The Armenian servicemen explained their interest in this city by its convenient location, just 10 kilometers from Khankendi, the center of the Nagorno Karabakh region,” the article noted. “In addition, the only airport in Nagorno Karabakh capable of receiving heavy aircraft was located in Khojaly. The argument is strange because, according to numerous witnesses, there were no heavy weapons in town, and it was impossible to launch mortar fire at Khankendi from such a distance.”

“Nevertheless, the Armenian command completely blocked the town (even telephone communications were cut off, electricity as well),” reads the article. “Armenian sources report that the city residents were allegedly warned of an imminent assault. However, according to the common opinion of human rights activists, no warning about evacuation can be an excuse for the massacre and killings of civilians who didn’t want to flee their homes and apartments”.

The Russian Memorial Human Rights Center says that by the beginning of the operation, 2,000-4,000 civilians remained in Khojaly town.

“Eyewitnesses say that military support was provided to the Armenian military by the 366-th Motor Rifle Regiment of the Armed Forces of the former USSR, without the direct order of their leadership,” reads the article. “As Dmitry Polyakov, general of the Main Intelligence Directorate of the former USSR, later said in an interview with the Financial Times, 103 Armenians who remained in Nagorno-Karabakh served in this regiment. The shelling began at 23:00 (GMT + 4), at 1:00 the infantry entered Khojaly, and by 7:00 the resistance of the defenders of the town was completely suppressed.”

“Surviving residents of Khojaly said that during the assault they tried to hide in the basements of residential buildings, and then tried to leave the town,” the article said. “Some managed to escape, but not everyone. The Memorial Human Rights Center found that about 200 bodies were delivered to neighboring Agdam district four days after the capture of Khojaly, 13 of these bodies belonged to children and 51 to women. The cause of death of the vast majority of them was bullet wounds, and some were killed with blunt objects. There were also recorded facts of abuse of the bodies and even scalping.”

“This is just a small part of the evidence published by the Russian and European media immediately after the tragedy,” the article said.

“The Armenian side claims that such a death toll is allegedly connected with the fact that Khojaly residents were leaving along the "free corridor" that was provided for them,” the article said. “The armed people fired at the Armenian outposts, thereby forcing return fire. However, these facts were not confirmed and it is strange to justify the death of innocent people this way.”

“There is no excuse for such atrocities,” the article said.

“According to the Azerbaijani authorities, the result of the terrible massacre is as follows: 613 dead, including those frozen that winter night (63 of them children, 106 women, 70 old people), 8 families were completely destroyed; 487 wounded (including 76 children); 150 missing,” the article said. “Moreover, 1,275 people were held hostage and 5,379 people were expelled from their place of permanent residence. So far, nothing is known about the fate of 150 people (of which 68 are women and 26 are children).”

“In any case, the Khojaly massacre is a tragedy of not only the Azerbaijani people. Such atrocities do not have any justification.”