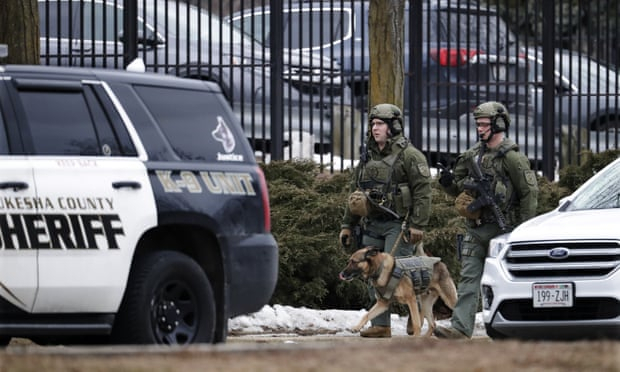 An employee opened fire at the Milwaukee campus of Molson Coors on Wednesday, killing five fellow workers before taking his own life, police said.

Police identified the man responsible for the shooting at one of the world’s largest brewers of beer as a 51-year-old Milwaukee man who died of a self-inflicted gunshot wound.

“There were five individuals who went to work today, just like everybody goes to work, and they thought they were going to go to work, finish their day and return to their families. They didn’t and tragically they never will,” the Milwaukee mayor, Tom Barrett, said.

Authorities offered no immediate motive for the attack.

Speaking at a White House press conference on the coronavirus outbreak, Donald Trump expressed his condolences.

Police responded to what they called a “critical incident” on the campus on West State Street in the north-west part of the city.

The shooting occurred at a sprawling complex that includes a mix of corporate offices and brewing facilities. At least 600 people work at the complex, which is widely known in the Milwaukee area as Miller Valley, a reference to the Miller brewing company, now part of Molson Coors.

“Unfortunately, I am devastated to share that we lost five other members of our family in this tragic incident,” he said in a statement. “There are no words to express the deep sadness many of us are feeling right now.”

He said the office would be closed the rest of the week and the brewery shuttered “for the time being” to give people time to cope.

James Boyles told the Milwaukee Journal Sentinel that his wife, Lasonya Ragdales, works at Molson Coors in the claims department. She was texting from inside the facility and told her husband that there was an active shooter and she was locked in a room with a bunch of co-workers, the Journal Sentinel reported.

Miller Valley features a 160-year-old brewery, with a packaging center that fills thousands of cans and bottles every minute and a distribution center the size of five football fields.

The facility is also home to corporate customer service, finance, human resources and engineering. Tours take people to underground caves where beer was once stored, a saloon with intricate woodwork, a stein hall with stained-glass windows, a champagne room meeting hall with leaded-glass windows, and an outdoor beer garden that can hold 300 people.