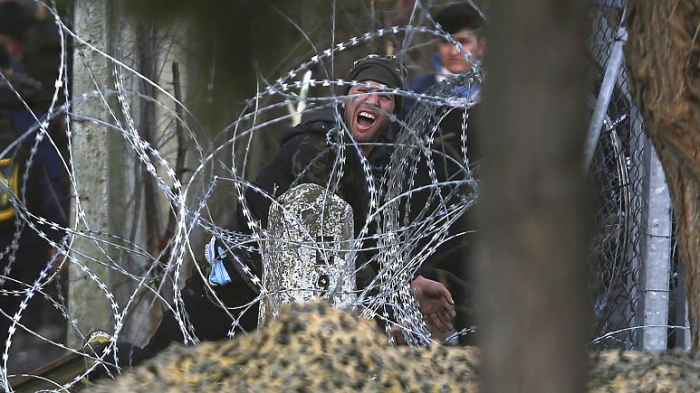 On Sunday night, Greece's Prime Minister Kyriakos Mitsotakis tweeted that his country will not be accepting asylum applications for one month, after Turkey's decision to let migrants pass in their attempts to travel to Europe.

Mitsotakis warned in a series of tweets that Greece will protect the EU's outer borders, telling migrants that they will be turned back if they attempted to cross its border. On the Greek-Turkish land border, Greek army and police patrols using tear gas and stun grenades to thwart attempts by thousands to push into the country overnight.

Officials said the situation was much calmer Sunday morning. But in the afternoon, authorities used tear gas and water cannons to push back another crowd attempting to cross. Migrants threw rocks and other objects, and one policeman was injured. Greek authorities said they stopped about 10,000 crossing attempts Saturday, and another 5,500 on Sunday. Amidst a growing number of border-crossing attempts, Greece had deployed military forces to fortify its border.

On the Greek-Turkish land border, Greek army and police patrols using tear gas and stun grenades to thwart attempts by thousands to push into the country overnight.

Officials said the situation was much calmer Sunday morning. But in the afternoon, authorities used tear gas and water cannons to push back another crowd attempting to cross. Migrants threw rocks and other objects, and one policeman was injured. Greek authorities said they stopped about 10,000 crossing attempts Saturday, and another 5,500 on Sunday.

Turkey's Minister of foreign affairs posted the photos of border violence, tweeting: "Look who’s lecturing us on international law! They’re shamelessly throwing tear gas bombs on thousands of innocents piled at their gates. We don’t have an obligation to stop people leaving our country but #Greece has the duty to treat them as human beings!"

Greece's move comes after migrants tried to cross into Europe in larger numbers after the Turkish government said they would no longer prevent refugees from travelling to Europe.

“Turkey, instead of curbing migrant and refugee smuggling networks, has become a smuggler itself,” the Greek government said in a statement.

A Turkish official said the fighting in Idlib was directly linked to Turkey's decision to open the gates for refugees to Europe. He said Ankara had changed its focus to preparing for the possibility of new arrivals from Syria “instead of preventing refugees who intend to migrate to Europe.”

“Europe and others must take robust action to address this monumental challenge,” said Fahrettin Altun, the communications director for Turkey's President Recep Tayyip Erdogan. “We can’t be expected to do this on our own.”

Erdogan's decision open his country’s borders with Europe made good on a longstanding threat to let refugees into the continent. His announcement marked a dramatic departure from a previous policy of containment, an apparent attempt to pressure Europe into offering Turkey more support in dealing with the fallout from the Syrian war to its south.

According to the UN, an estimated 13,000 migrants are currently waiting and stuck on the Turkish side of its border with Greece. Some of those who spent the night at the border included families with young children, the organisation said.

"Deterrence at our borders to the maximum"

In a news briefing after the cabinet meeting, government spokesman Stelios Petsas announced that Greece will not accept for a month, beginning Sunday, any asylum applications from migrants entering the country illegally and, where possible, will immediately return them to the country they entered from.

Greece is determined to receive help from the EU and has announced that it will also ask the European Border and Coast Guard Agency, also known as Frontex, to engage in a rapid border intervention to protect Greece's borders, which are also EU's borders, Petsas said.

The decisions will be communicated to the EU's Foreign Affairs Council so that Greece can benefit from temporary measures to face an emergency.

Petsas said Turkey is violating its commitments from the 2016 EU-Turkey agreement and of becoming itself a trafficker instead of cracking down on them.

He called the recent migration movement "a sudden, massive, organized and coordinated pressure from population movements in its eastern, land and sea, borders."

Under a 6 billion euro deal in 2016, Turkey agreed to stem the tide of refugees to Europe in return for financial aid, after more than a million people entered Europe in 2015. Turkey has since accused the EU of failing to honour the agreement, and Erdogan has frequently threatened to allow refugees into Europe unless more international support was provided.

Turkey already hosts 3.6 million Syrian refugees, as well as many others from Africa, Asia and the Middle East. Turkey borders Greece and Bulgaria, both European Union members.