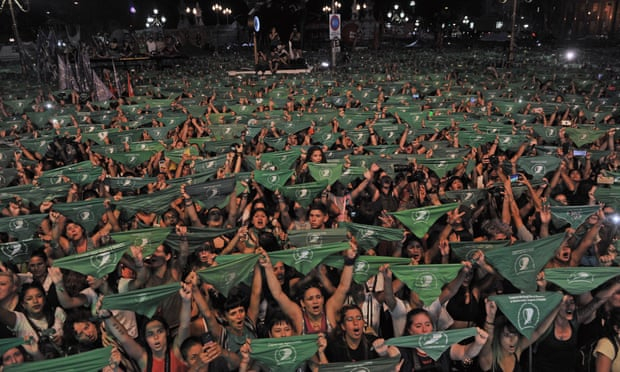 Argentina is on track to become the first major Latin American country to legalise abortion, the Guardian reported.

Its president, Alberto Fernández, said on Sunday that he intends to send a legal abortion bill to congress in the next 10 days.

“The state must protect its citizens in general and women in particular,” he said in his first annual address to congress. “Society in the 21st century needs to respect the individual choice of its members to freely decide about their bodies.”

Abortion is illegal across most of Latin America. In a predominantly Roman Catholic region of 21 countries, it is legal only in Cuba and Uruguay, with populations of 11.2 and 3.4 million respectively. It is also legal in Anglican Guyana, population 780,000.

Should congress approve the bill, Argentina – with a population of 45 million – will become the first major nation in the region to legalise the practice.

A previous bill to legalise abortion was defeated in August 2018 following what campaigners allege was a failure by Mauricio Macri, then the president, to throw his support behind it and the church’s strong opposition. This time, however, the bill is being presented by the president, and with the governing party’s support.

“We are very happy; today is a historic day,” the writer and campaigner Ana Correa said. “The decriminalisation and legalisation of abortion is finally within reach. Let’s hope that congress is up to the role assigned to it.”

The right to an abortion is severely restricted across Latin America. Terminations are only permitted in cases of rape or if the pregnancy will endanger the life of the pregnant woman, as in Argentina where the practice was otherwise banned in 1921.

The Dominican Republic, El Salvador, Haiti, Honduras and Nicaragua have outright bans with no exceptions.

“It is clear that there are many women who do not feel constrained by the foreseen penalties against abortion and who seek them out to end their pregnancies,” Fernández said.

Criminalising abortion “has condemned many women, generally poorer women, to seek out abortions in totally clandestine situations, putting their health and sometimes their very lives at risk”.

Mariela Belski, the director of Amnesty International in Argentina, welcomed the announcement. “It is clear that the president heard the demands of women, adolescents and girls, and that he has the conviction that Argentina is ready for this bill,” she said.