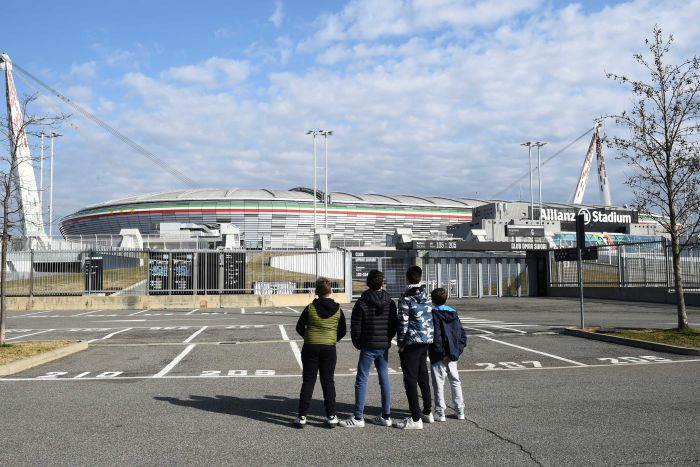 Five Serie A matches scheduled to go ahead behind closed doors this weekend, including the key clash between Juventus and Inter Milan, have been postponed until May because of the coronavirus crisis.

The fixtures were originally due to be played without fans, but on Saturday the league decided to call them off as part of "urgent measures for the containment and management" of COVID-19.

However, with the coronavirus outbreak worst in northern Italy, Lazio was permitted to play its match against Bologna in Rome and won 2-0 with its fans in attendance.

Lazio moved two points ahead of idle Juventus and eight ahead of Inter, which also had a game postponed last weekend.

Juventus's next game is at Bologna on March 8 — and there are concerns that match and other games next weekend could be postponed, too, if the Government decides to extend emergency anti-virus measures for another week.

The other four matches postponed were Udinese vs Fiorentina, AC Milan vs Genoa, Parma vs SPAL and Sassuolo vs Brescia. At the Stadio Olimpico, many fans wore masks over their faces as Lazio extended its unbeaten run to 21 games.

The decision by Serie A to postpone the games brought a mixed reaction from coaches and officials. "Making a decision at the last minute could probably have been avoided. I am now worried about the future, because we don't want to be in the same position next week," Inter Milan chief executive Giuseppe Marotta said.

"Football is about the fans, it's enthusiasm, passion, emotion, which is not there when you play behind closed doors." AC Milan coach Stefano Pioli said he "worried all week about what it meant to play without fans".

"I'm glad we are not playing but they could have decided earlier," he said. Lazio coach Simone Inzaghi said: "We have to accept the decisions that come from above, knowing that we have a significant problem in Italy."

"Will it be an advantage for Lazio? This morning I was only focused on today's game."

Only two matches will be played on Sunday: Lecce-Atalanta and Cagliari-Roma. The Sampdoria-Hellas Verona match on Monday could also be postponed.

Juventus had more to deal with than just the postponement — the Turin club suspended the activities of its under-23 team after a fourth player at third-tier club Pianese, its most recent opponents, tested positive for coronavirus.

Juventus said it was a precautionary measure and the club was in constant contact with health authorities.

"It is specified that, six days after the game, the Juventus players remain asymptomatic and are under medical supervision," the club said in a statement.
Gazetta dello Sport said the players had been quarantined in their homes, though this was not mentioned by Juventus. Its under-23 side beat Pianese 1-0 last Sunday.

Earlier, Pianese said "after a series of checks, Pianese announce that a fourth player is infected by Covid-19. He too is in solitary confinement at home and is under observation by the relevant authorities".

One member of staff has also been infected and the club, based in Piancastagnaio in the region of Tuscany, said on Friday the entire squad have been quarantined in their homes.

The club said the first player tested positive on Thursday, several days after he missed a match because he was feeling slightly feverish.

Italy has moved to postpone or cancel a number of sporting events in the north of the country, while the Six Nations rugby union game between Ireland and Italy which was scheduled for Dublin next weekend was postponed earlier this week based on an instruction from the Irish Government's national public health emergency team.

Switzerland has banned all public events drawing more than 1,000 people. France has banned all large indoor gatherings, with Sunday's scheduled Paris half-marathon was scrapped, but Ligue 1 football matches have been unaffected by the decision.

In England, the Premier League has continued, however Newcastle manager Steve Bruce has responded to the health crisis by banning his squad from shaking hands.

Bruce acted late this week after receiving advice from the club's doctor that players should minimise physical contact to stop the potential spread.

"There is a shaking-hands ritual here, everyone shakes hands with each other when we see each other in the morning. We have stopped that on the back of the virus," Bruce said.

"Let's hope it doesn't get any worse. We are like everyone else, glued to the TV seeing what happens next. We are mindful of bugs sweeping through."