Britain unveils its largest gold coin ever that weighs 7kg 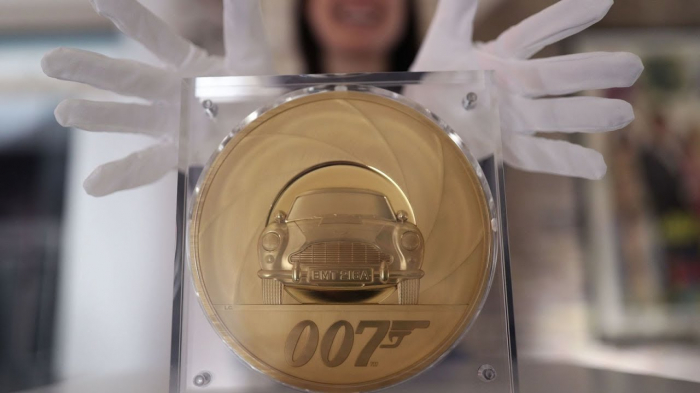 Britain's Royal Mint is on the Moneypenny with the launch of its James Bond commemorative coin and gold bar collection ahead of the release of the 25th Bond film.

The collection includes a number of Royal Mint firsts including a 7kg gold coin designed by Royal Mint designer Laura Clancy. It is the largest coin with the highest face value to be produced in the Mint's 1,100-year history, The Irish Independent reports.

The collection also includes 2kg gold, 1kg gold and 5oz gold and silver coins along with the world's first James Bond bar in gold and silver, featuring all the Bond film titles. The precious metal bar will be available for purchase from mid-March.

Clancy has placed the DB5 centre stage on the 7kg coin, with its famous BMT 216A number plate and gun barrel surround.

"James Bond is a global icon that has captured the public's imagination for generations, said Clare Maclennan, divisional director at The Royal Mint. "The collection celebrates everything that is synonymous with the quintessentially British spy."

"No Time to Die", which is expected to be Daniel Craig’s final outing as Bond, will be released on April 2 in the UK and April 10 in the U.S.