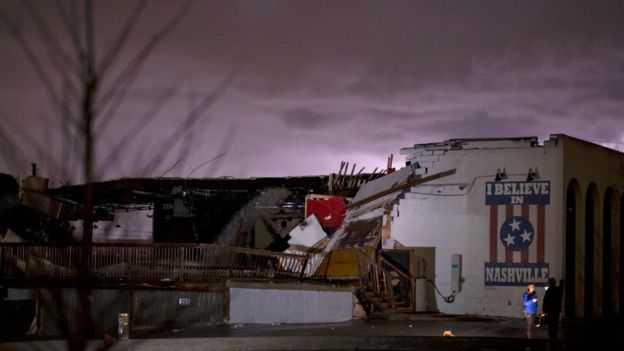 At least 19 people have died after two tornadoes ripped through central Tennessee, including the state's biggest city Nashville.

Officials said the tornadoes also caused widespread damage to buildings in the city.

Nashville Mayor John Cooper said the city was "devastated", and urged people to "lend a helping hand" to neighbours.

Neighbourhoods throughout the city have been plunged into darkness amid infrastructure damage.

The death toll may rise given the number of people who remain missing throughout the state, Tennessee Governor William Lee said on Tuesday.

"It is an ongoing search and rescue right now," the state's Emergency Community Relations Officer Maggie Hannan told the BBC.

About 44,000 people have been left without power, Nashville Electric said.

There was also "significant damage" to John C Tune Airport, about eight miles from the city centre, the airport said.

Police in the Mt Juliet suburb, east of Nashville, said: "There are gas lines that are leaking, power lines that are on the ground, and multiple emergency responders are responding to those who are injured."

Nashville's Emergency Operations Centre said it had opened a shelter with running water in a farmer's market to help displaced residents.

The city's schools, courts and transport lines will be closed on Tuesday due to the damage, officials said.

Election polling sites located at schools will be open, but four polling stations have been moved.