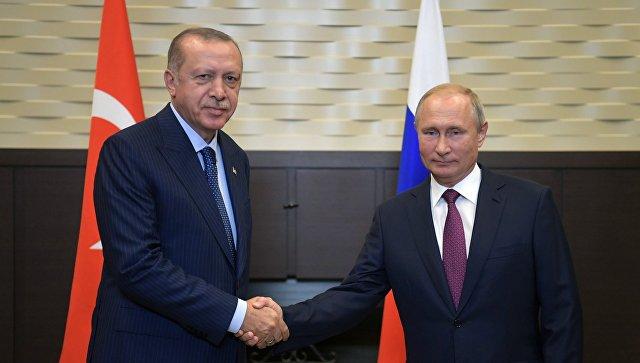 After weeks of tension, Turkey and Russia agreed on Thursday to continue their cooperation in the northwestern Syrian province of Idlib, declaring a cease-fire while expressing an intention to provide a new status quo for the war-torn province, AzVision.az reports citing Daily Sabah.

Turkey and Russia have reached the agreement during a meeting between President Recep Tayyip Erdogan and his Russian counterpart Vladimir Putin in Moscow.

The cease-fire was expected to begin at midnight Friday, leading to a new status quo in Idlib.

Speaking in a joint press conference, Erdogan said the Syrian regime and its aggressiveness are the main reasons behind civilian suffering in Idlib.

“Considering all the recent developments, a new status quo is inevitable in Idlib,” he added.

“We have deployed additional military units to Syria to ensure regional stability. Our priority is to enable de-escalation in Idlib. The cease-fire in Idlib will begin tonight a minute after midnight,” he also said.

Putin said: “We have always solved our problems by working together. Today was no different.”

Underlining attacks in Idlib must stop, Putin added: “We agreed to continue the will and conditions of Astana deal. We have prepared a document as a result of today’s meeting, hoping that it will put an end to civilian suffering in Idlib.”

The nearly three-hour-long summit between the two presidents was followed by an inter-delegation meeting for more than two and a half hours.

In Russia, Erdogan is being accompanied by Foreign Minister Mevlut Cavusoglu and Defense Minister Hulusi Akar, among other high-profile government representatives.

Both leaders underlined the need to reach an agreement at the start of the Kremlin talks.

In his opening remarks at the Kremlin, Putin had thanked Erdogan for accepting his invitation for talks on the recent escalation.

"Thank you for coming. There is always something to talk about, but now the situation in a well-known area – Idlib – has escalated so much that it requires our direct, personal conversation," he said, offering his condolences over the fallen soldiers.

"The loss of life is always a great tragedy. Unfortunately, as I told you on the phone, no one, including the Syrian military, knew about their (Turkish soldiers) whereabouts," he added.

Putin went on to say that the Syrian regime forces have suffered great losses in Idlib, the last opposition stronghold in Syria.

"We need to talk about the situation that has developed to date so that nothing like this happens again, and so that it does not destroy the Russian-Turkish relations, which I, and as I know, you too, treat very carefully," he said.

Erdoğan said the decisions taken at the meeting will ease tensions in the region and in Turkey.

Erdoğan had said on Wednesday that he expected his talks with Putin to lead to a rapid cease-fire in northwest Syria.

The two leaders were set to discuss the recent developments in Syria, including cease-fire violations in the Idlib de-escalation zone.