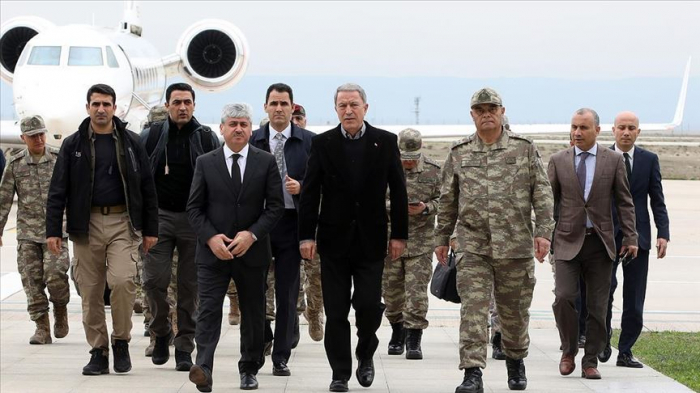 “As of March 15, we will start joints patrol along the M4 [highway]. We started working on the principles of the security corridor to be established along the highway,” Hulusi Akar said in Turkey’s southern Hatay province, bordering Syria.

A Russian military committee will visit Turkey early next week, he added.

"We expect a permanent cease-fire, and to provide the environment for the return of more than 1 million innocent displaced people, 81% of them women and children,” he said

No violations of the cease-fire have been reported since Thursday, when Turkish and Russian officials reached the new deal in Moscow, Idlib, Akar said.

Warning againt attacks on Turkish troops in the region, which have sown chaos since the beginning of the year, he stressed: “We would like everyone to know that we will intensely retaliate for any attack on Turkish troops or observation posts in Idlib under our right to self-defense.”

On Thursday, Turkish President Recep Tayyip Erdogan and his Russian counterpart Vladimir Putin agreed to a new cease-fire for Idlib effective as of midnight Thursday.

Under the agreement, all military activities are to end in Idlib, with the establishment of a security corridor 6 kilometers (3.7 miles) to the north and south of the key M4 highway.

Joint Turkish-Russian patrols will also begin on March 15 along the M4 highway from the settlement of Trumba – 2 km (1.2 miles) to the west of Saraqib – to the settlement of Ain al-Havr, according to the deal.

Turkey launched Operation Spring Shield on Feb. 27 after at least 34 Turkish soldiers were martyred last month in an Assad regime airstrike in Idlib province, and after repeated violations of previous cease-fires. Under a 2018 deal with Russia, Turkish troops were in Idlib to protect civilians from attacks by the regime and its allies.