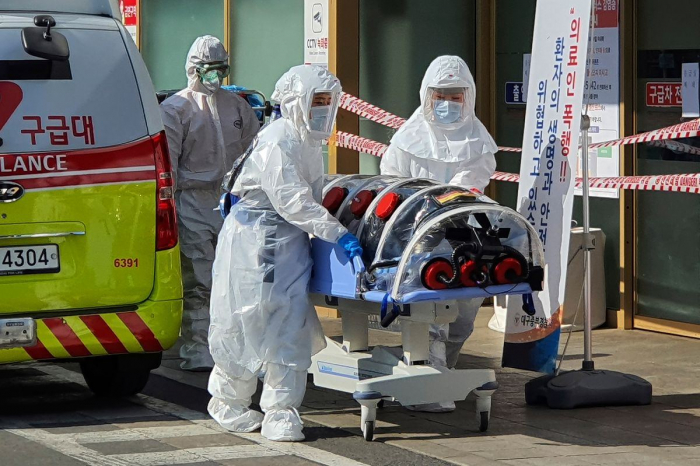 A majority of the new cases again came from the southeastern city of Daegu and neighboring North Gyeongsang Province, the two epicenters of the virus outbreak that together account for more than 90 percent of all infection cases, according to the Korea Centers for Disease Control and Prevention (KCDC).

Of the 367 new cases, which were detected Saturday, 294 cases came from Daegu, the country's fourth-largest city with a population of about 2.5 million that is located some 300 kilometers from Seoul.

About 60 percent of confirmed cases here have been linked to a Daegu branch of a religious sect, Shincheonji.

North Gyeongsang Province, one of the most severely hit areas, saw its infection cases rise 32 to 1,081, according to the KCDC.

Seoul and nearby Gyeonggi Province each reported 12 additional cases. Their totals now stand at 120 and 142, respectively.

It marked the first time since Feb. 26 that South Korea reported fewer than 400 new infection cases.

South Korea raised its virus alert level to the highest on Feb. 23, enabling all-out quarantine measures by the health authorities as well as district governments.

A virus-hit apartment in Daegu has been under lockdown as one-third of its residents were confirmed to have contracted the illness.

The patients at the apartment complex were followers of the Shincheonji church.

The provincial government of North Gyeongsang Province said more than 580 facilities or houses in its own districts have been placed under such lockdowns.

So far, 50 people, mostly with preexisting medical conditions, have died of the respiratory disease that originated in China late last year.

The KCDC said the number of virus patients released from hospitals after recovering from the viral disease came to 130 as of Sunday, up 12 from the previous day.

The number of people being checked for the virus and under quarantine came to 19,376 as of Sunday, down 244 from the day before, the KCDC said. The country has tested a total of 181,384 suspected cases, with 162,008 testing negative.

Currently, there is no evidence that the new coronavirus is airborne. The World Health Organization said the virus is transmitted through droplets or close contact. One of the best ways to avoid contracting the virus is to wash one's hands with soap for at least 20 seconds and avoid mass gatherings, health officials said.