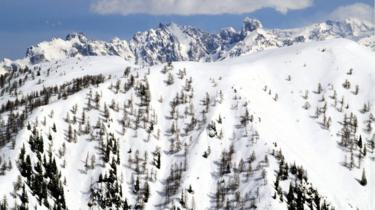 At least six people have died in two separate avalanches in the Austrian Alps, police say.

Five people, believed to be Czech nationals, were killed in the mountainous Dachstein region, about 80km (50 miles) south-east of Salzburg.

They were caught while on a snowshoeing trip when the avalanche hit about 2,800m (9,200ft) up, police said.

In a separate incident, a 33-year-old police officer died in an avalanche in the southern Carinthia region.

In response to the avalanche in the Dachstein mountain range, seven helicopters were used to transport some 100 rescuers to the site to help search for those missing, the head of operations for the local mountain rescue team, Heribert Eisl, said.

"The avalanche happened on the northern side of the Dachstein, just under the entry point Rankluft," Mr Eisl said.

"We mobilised all our staff, but unfortunately there was no happy ending," he added.

Separately, the police officer killed in the Carinthia region was reportedly taking part in a training exercise.

In January 2019, 60 hotel guests escaped injury when their building was hit by an avalanche overnight in Ramsau am Dachstein.

That avalanche was strong enough to throw vehicles out of its path and burst through windows. More than 40,000 people were trapped in one of Austria's largest ski resorts at the time because of the avalanche risk.