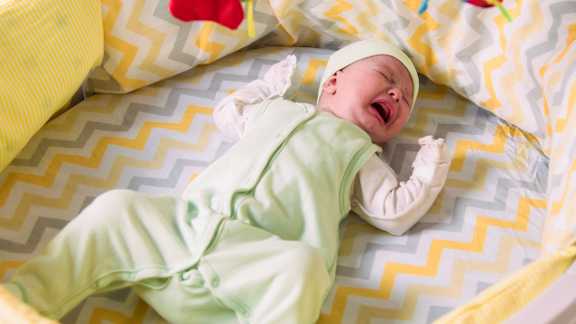 Many babies struggle to fall asleep without a parent at their side, or wake frequently during the night -- a phase that's exhausting for new parents but usually passes quickly.

However, infants with very disturbed sleep patterns could be at greater risk for anxiety and emotional issues in later childhood, new research suggests.

Australian researchers tracked 1,507 first-time mothers and their babies and found that one in five had what they described as "persistent severe sleep problems" during their babies' first year.

"A lot of the infants were waking up quite a lot at three months, and that's normal, but we found that around 19% really had persistent and severe sleep problems that were troublesome right across that first year," said Dr. Fallon Cook of the Murdoch Children's Research Institute in Melbourne, Australia, who led the research.

"These are babies who, even by 12 months of age, are still waking three or more times during the night," said Cook. "And they might be taking up to hour to go to sleep, and they are very difficult to settle when they awake during the night."

The mothers involved in the study described their baby's sleep patterns at three months, six months, nine months and 12 months online and in one face-to-face interview, Cook said.

They were then asked about their child's mental health at four and 10 years of age, using widely used medical questionnaires to assess anxiety and other mental health difficulties.

The researchers classified the sleep patterns of a quarter of the infants as "settled," while more than half (56%) had moderate, fluctuating sleep problems and 19.5% had persistent severe sleep difficulties.

Compared with infants whose sleep patterns were settled, those with persistent and severe sleep difficulties were nearly three times as likely to have symptoms of emotional problems when they were four years old, according to the study, which published Monday in the journal Archives of Disease in Childhood.

And they were more than twice as likely to meet the diagnostic criteria for an emotional disorder by the time they were 10.

"These infants were more likely to experience elevated symptoms of separation anxiety, fear of physical injury and overall elevated anxiety than settled infants," the study reported.

Parents may want to watch "for developing signs of emotional and mental health problems if their infant has moderate to severe sleep issues," said Jodi Mindell, associate director of the Sleep Center at the Children's Hospital of Philadelphia and the chair of the Pediatric Sleep Council, who was not involved in the research.

"The primary finding of this study is that infants with sleep problems are up to twice as likely to have mental health issues, primarily anxiety-based concerns at ages four and 10 years. Putting it in context for parents, the likelihood increases from approximately 5-15% for all children to about 10-25%," she said via email.

"It is also important to understand that these results may mean that sleep issues result in later problems. But it is just as likely that sleep problems are an early indicator," she said.

"Either way, making changes can often help an infant sleep better, and may prevent later problems with both sleep and other concerns."

Marie-Hélène Pennestri, an assistant professor at McGill University in Canada, said that night waking wasn't always perceived as a problem by new moms.

"Some mothers are happy to breastfeed and co-sleep," said Pennestri, who wasn't involved in the research. "They will therefore 'observe' more infants awakening because they are closer, but it does not necessarily mean that they consider that their infant has a 'problem.'"

No cause for alarm

Cook said she didn't want the research to alarm parents of babies and children who struggled with sleep.

"Around 56% had sleep problems that fluctuated. It's definitely normal to have a baby that has some difficulty with sleep. The ones we need to keep an eye on are the ones that very persistent, severe difficulties," she said.

The group was compared against the "settled babies," despite it being more common for babies to experience moderate, fluctuating sleep problems.

"Settled babies are the exception rather than the rule, and results should be interpreted with this in mind," the study noted.

However, she said that the mechanism between sleep and mental health wasn't well understood, and there were likely many variables involved.

"We need to look more at what's happening in the home. How are these babies being settled to sleep? There's possibly genetic factors at play too," said Cook
She urged any parents worried about their child's sleep pattern to speak to their family doctor.

"It's important we don't stress out parents even more. If your baby isn't sleeping well, often you feel guilty because you think you're not getting things right," she said.

"Parents try help they've found online or from friends or family, but for some babies that just won't work, so talk to your family doctor about what support services are available locally. It can be life changing for families to have the baby sleep a little better. "