'How much?': Venezuela opposition received bribe offers to give up congress 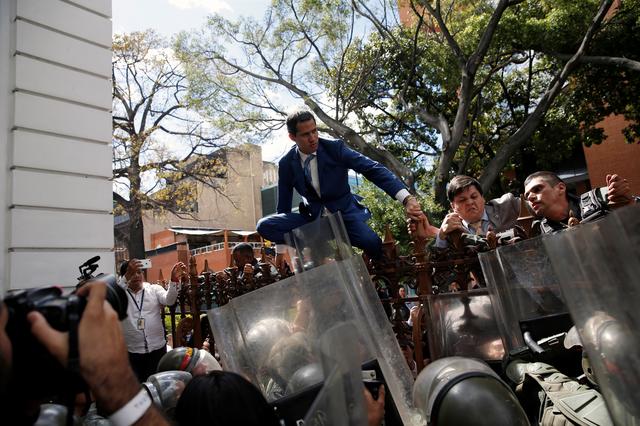 An examination by Reuters of the circumstances surrounding the vote shows there was evidence to support their accusations.

A previously undisclosed recording of a conversation between two congressmen - along with interviews with a dozen other lawmakers and unreported text messages - sheds light on the ruling Socialist party’s strategy of making cash offers and threats to exploit divisions within Guaido’s coalition.

Maduro’s leftist government, branded a dictatorship by Washington and targeted by U.S. sanctions, denied using coercion, as did the newly elected head of congress, Luis Parra.

In the recording, at 9 a.m. on Dec. 15, Kerrins Mavarez, a 34-year-old congressman for the coastal state of Falcon, took a phone call from a senior opposition figure worried the government was plotting to wrest control of congress.

Mavarez confirmed to Stefanelli he had received phone calls from an unnamed government emissary threatening him with arrest and asking how much money he wanted to change sides.

“I’m really scared,” said Mavarez, who did not identify the emissary. Mavarez said he had resisted the offer but asked Stefanelli for the opposition’s support: “Don’t leave me alone.”

“It’s important for us to know we can rely on you,” Stefanelli said in the recording, which he shared with Reuters, promising Mavarez that opposition leaders would back him.

“Your position will mark your life.”

By the time of the Jan. 5 ballot, Mavarez had made up his mind. He joined some 15 other opposition lawmakers in voting against Guaido’s re-election and instead backed Parra, who had aligned himself with Maduro’s Socialists.

At a news conference four days after the vote, Mavarez denied accusations by other opposition figures that he took a bribe and said he acted with “bravery” after Guaido failed to advance solutions to Venezuela’s economic and political crisis.

Asked by Reuters about the recording, Mavarez did not deny its authenticity and said both sides pressured him, but he voted “with full freedom.”

He accused the opposition of staging the threatening calls he received in December to assess if he was involved in a conspiracy, but did not give evidence for that. A spokesman for Guaido said no calls or messages were staged.

Reuters was unable to determine whether any bribes were actually made or who made the December calls. Stefanelli said he recorded Mavarez because he suspected that he already had been “bought,” without elaborating further.

Neither representatives for Parra nor Venezuela’s Information Ministry responded to requests for comment.

The opposition politicians interviewed by Reuters said Parra’s allies in December had solicited 30 of their colleagues - the number needed to swing the majority - with offers of up to $700,000, picking targets in financial need and frustrated with Guaido. They offered evidence for three cases, which are detailed in this story.

“They were calling up those who had doubts or who were unhappy with the leadership,” said lawmaker Jose Guerra.

Citing his conversations with colleagues targeted, Guerra said one lawmaker close to Parra, Jose Noriega, who was formerly in Guaido’s Popular Will party, made many of these calls.

Noriega denied this to Reuters.

According to the deputies and people close to the Socialist party, Maduro wanted to take advantage of Guaido’s diminished popularity to place a new pliant opposition in congress that could pass legislation required by his government.

But, according to these people, Parra failed to sway enough opposition legislators.

This, they said, forced him to bar entry to Guaido and his allies and claim control of the 167-seat congress without proof he met the requirement that half of lawmakers be present. Parra has said the vote did have quorum, but he has never presented an official list of which legislators voted for him in a show of hands.

On the day of the vote, soldiers with riot shields blocked Guaido and allies from entering parliament, according to Reuters reporters, enabling pro-government legislators to elect Parra.

Maduro said on state television that Guaido did not want to enter congress as he did not have the votes. He celebrated Parra’s rise as a “rebellion” within congress.

Although opposition lawmakers later re-elected Guaido as head of the National Assembly in a separate session at a nearby newspaper’s offices, Parra’s rival election was a symbolic blow and deprived them of control of the building itself.

Guaido, who accuses Maduro of stealing the 2018 presidential election, proclaimed himself rightful president last year based on his status as head of congress - with the support of Washington and dozens of other nations.

In December, before the vote, the main opposition coalition evicted Parra after a local media report accused him and others of abusing their positions to burnish the reputation of a government-linked businessman. Parra denied that at the time and remains as head of congress.

Mavarez replaced Stefanelli in congress after the elder lawmaker fled abroad due to a Dec. 13 Supreme Court request to investigate him for alleged crimes related to a plan to seize military installations. A pro-government legislative superbody agreed to remove his parliamentary immunity three days later, though it is unclear how the case has proceeded since.

In a phone interview, he said he could not reveal his location or when exactly he left due to security concerns.

Venezuelan authorities have opened criminal probes into Guaido’s finances and involvement in anti-government protests and stripped many more of his colleagues of parliamentary immunity on grounds they also conspired to overthrow Maduro. Some 30 lawmakers remain detained, in exile, or in refuge at embassies in Caracas.

During his call with Stefanelli, Mavarez said the go-between had told him he too would be arrested for participating in an unsuccessful military uprising against Maduro last April. Furthermore, the intermediary warned him that Mavarez lacked immunity as a substitute lawmaker, making him more vulnerable, the recording reviewed by Reuters shows.

In the call, Mavarez recounted to Stefanelli that earlier that morning the emissary asked him: “How much do you want and which bank account do you want it in?”

Mavarez declined to identify the emissary to Reuters and Stefanelli said he did not know who the individual was.

“THE SCORPION WANTS TO STING ME”

Lawmaker Alfonso Marquina was another target.

On Dec. 11, Marquina attended a congressional meeting during which he chastised colleagues for mistakes the opposition made last year, Marquina told Reuters. Afterwards, Noriega, the lawmaker allied with Parra, approached him and suggested they talk.

Suspicious of Noriega’s motives, Marquina messaged Guaido to keep him apprised of the proposition.

“My president, the scorpion wants to sting me,” Marquina told Guaido, referring to government pressure over the National Assembly vote that the opposition dubbed Operation Scorpion.

They agreed Marquina would go to find out more.

The next morning, Noriega wrote to Marquina. “Comrade, good morning. I’ll wait for you at 8 a.m. at the Tamanaco so we can have breakfast,” he said, referring to Caracas’ plush Tamanaco hotel, according to their unreported messages seen by Reuters.

Once at the hotel restaurant, Marquina said he placed a phone in a bag by their table to secretly record their conversation.

According to the 5-minute tape, which Marquina released publicly in January, Noriega offered him $700,000 to support Parra, with an initial payment of $150,000 before the vote, along with the chair of the congress’ finance commission.

“Whoever extends their hand and accepts the initial amount gets a commitment,” Noriega said.

In a statement to Reuters, Noriega reiterated previous denials that the conversation took place and said the recording formed part of a Guaido-led campaign to discredit Parra’s election. The Guaido spokesman said the tape was genuine.

Marquina stands by the audio’s authenticity. He said he refused the money - but claims 15 other lawmakers had a price.

Arkiely Perfecto, who left a pro-Maduro party to join the opposition early last year, told a colleague on Dec. 10 that she had accepted 50,000 euros ($57,000) to vote for Parra, though she felt “terrible” for doing so, according to WhatsApp messages published by her political organization, which later expelled her.

“The dignity that I have maintained has meant a lot of people I love in my family have gone to bed with empty stomachs,” Perfecto said in one text to the colleague seen by Reuters, referring to previous offers she had turned down.

Perfecto told Reuters she had not accepted any money and said the messages were fabricated by her group, the Democratic and Inclusion Movement, to damage her.

Her group’s leader, Nicmer Evans, said Perfecto’s expulsion followed a proper disciplinary investigation which found she had received a payment.