Coronavirus: Europe now epicentre of the pandemic, says WHO 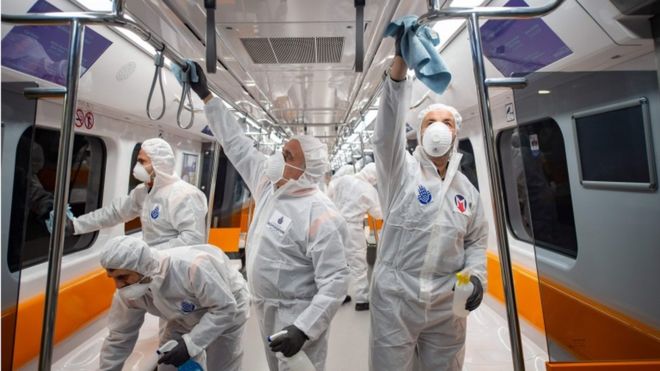 Europe is now the "epicentre" of the global coronavirus pandemic, the head of the World Health Organization says.

"Do not just let this fire burn," he said.

His comments came as several European countries reported steep rises in infections and deaths. Italy has recorded its highest daily toll yet.

Spain, the worst-affected European country after Italy, reported a 50% jump in fatalities to 120 on Friday. Infections increased to 4,200.

Prime Minister Pedro Sanchez says a state of alert will come into effect there on Saturday for two weeks.

Controls are also being introduced at an increasing number of borders in Europe, in response to rapid spread of the virus.

Why is Europe the 'epicentre'?

More than 132,500 people have been diagnosed with Covid-19 in 123 countries around the world, according to the WHO.

The total number of deaths has reached about 5,000 - a figure Dr Tedros described as "a tragic milestone".

"Europe has now become the epicentre of the pandemic, with more reported cases and deaths than the rest of the world combined, apart from China," he said.

"More cases are now being reported every day than were reported in China at the height of its epidemic."

As well as the increases in Spain and Italy, France now has 2,876 cases, Germany 3,062 and there are now 798 confirmed infections in the UK.

What are European countries doing about it?

Announcing the state of alert in Spain, Mr Sanchez said the government would "mobilise all the resources of state to better protect the health of all of its citizens".

It will be able to limit movement, order evacuations, prohibit access to certain places and intervene in industry for up to 15 days.

"Victory depends on every single one of us," Mr Sanchez said. "Heroism is also about washing your hands and staying at home."

All but "essential travel" to parts of Spain should be avoided, says the UK Foreign and Commonwealth Office.

Italy has imposed a nationwide lockdown.

Meanwhile, at least nine other countries in Europe are enforcing border closures, including:

Belgium, France, Switzerland and parts of Germany are among the latest countries to close schools.

There are also widespread curbs on large gatherings and measures to close theatres, restaurants and bars.

Germany's Bundesliga, the only one of the big five European football leagues still being played, is to suspend games in the top two divisions from Tuesday.

Paris's Louvre - the largest art museum in the world - announced it would close from Friday, as will the Eiffel Tower.

What are the developments elsewhere?

Pakistan is shutting all of its land borders and limiting international flights for 15 days, its foreign minister says.

In Canada, MPs have voted to suspend parliament and health officials have advised against non-essential foreign travel.

US President Donald Trump's travel ban on 26 European countries, which was met with anger and confusion. this week, will go into effect on Friday at midnight EDT (0400 GMT).

On Friday, Louisiana became the first US state to postpone its Democratic presidential primary, from 4 April to 20 June.

Meanwhile, Iran announced another 85 deaths, the country's highest toll in a 24-hour period, bringing the number of dead there to 514. The true figure is feared to be much higher.