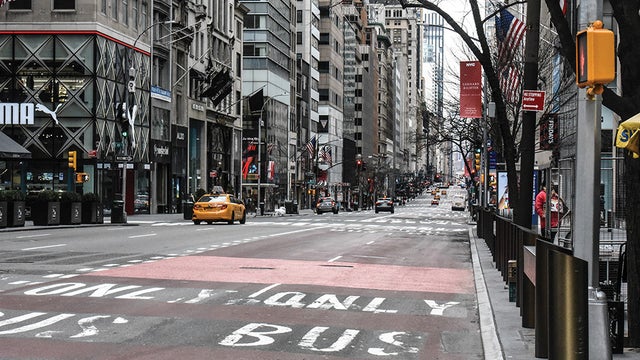 Environmental experts say the planet is getting a breather from the constant output of pollution by humans as the coronavirus puts many activities by individuals and businesses on hold.

Smog levels in China were reduced after factories shuttered during the outbreak there, and satellite images show a significant drop in air pollution in Italy while the country remains in a nationwide lockdown.

Similar declines are soon expected in the U.S., where half of all car trips are to and from work or school.

But while the coronavirus pandemic could disrupt daily routines for months, experts say the drop in heat-trapping emissions, while beneficial, will likely amount to just a blip in trend lines that show the world is moving toward unsustainable levels of carbon emissions, sometimes referred to as CO2.

“The damage from CO2 just accumulates, so every ton we don't release is not inflicted on the environment, but if everything goes back to business as usual when this ends, it won’t have much of an impact,” said David Archer, a professor of geophysical sciences at the University of Chicago.

Experts say emissions are likely to drop this year, continuing a trend already driven by the closure of coal-fired power plants as utilities transition to cleaner forms of energy.

And as schools close and more Americans work from home, the decline in travel is likely to aid the emissions dip.

Vehicle emissions are expected to drop in the U.S. In New York City, traffic congestion was measured at 17 percent this week, compared to 52 percent during the same period in 2019, according to transit data company TomTom.

Air traffic, however, is a more complicated piece of the emissions puzzle.

Airlines have asked the federal government for $50 billion in economic relief amid massive declines in passenger travel as countries close borders, conferences are canceled and family vacations are postponed.

“What counts is not the reduction in the number of people flying but the number of airplanes flying. There are a lot of airplanes running half empty,” said Michael Gerrard, a professor at the Columbia Law School and director of the Sabin Center for Climate Change Law.

Many airlines are flying with planes that are anywhere from 30 percent to 50 percent full, whereas this time last year flights were about 80 percent full, according to information collected by Airline Data Inc.

While planes still account for just a small percentage of global emissions, the airline industry is one of the fastest growing sectors with greenhouse gas emissions. Emissions increased 32 percent between 2013 and 2018.

With more online meetings being held amid the outbreak, some clean energy advocates hope it could lead to a behavioral shift.

“We’ve seen a rise of fly-in, fly-out business travel, where 30 people come in and out, everyone shakes hands and then leaves almost immediately,” said Dan Rutherford, aviation director at the International Council on Clean Transportation.

“That's bad for the environment and now people are understanding it's bad for public health, so I’m curious if that takes more of a long-term hit.”

But data shows that airline traffic, while often taking a hit for about a year after events like 9/11 or the first Gulf War, eventually picks up again.

Similarly, many of the day-to-day human activities that have been put on hold by coronavirus are likely to resume once calls to social distance or shelter in place come to an end.

“Are we talking about a short-term decline in emissions? Absolutely. It's not clear to me yet the epidemic will transform our economy to be more energy efficient or change human behavior,” said Rob Jackson, an environmental scientist at Stanford University as well as chair of the Global Carbon Project.

Gerrard added that emissions have often gone down during recessions, only to recover alongside the economy.

“I think we're talking about blips -- I’m not sure whether they’re small blips or large blips -- but there’s no reason to believe this is affecting overall trends unless it leads to a long-term crash of the global economy, which no one wants,” he said of emissions.

There are also fears that an economic downturn might slow progress on some environmental fronts.

Companies ranging from Microsoft to Nestle have previously pledged to reduce their carbon footprint -- efforts Jackson worries may stall when faced with financial challenges caused by coronavirus.

Those scenarios suggest any long-term improvements to stem climate change are unlikely to come out of the coronavirus pandemic.

“It’s like we’re spending money on a credit card that we can't pay back every year,” said Archer. “If you stop spending for a year but then continue later, it slows down accumulation of the debt, but it doesn't make that much difference in the long run if your spending just bounces back.”