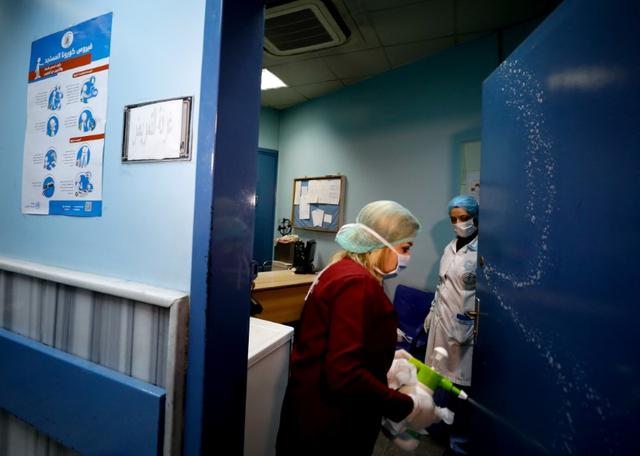 Syria, already shattered by nine years of war, has banned entry for foreigners arriving from many countries hit by the coronavirus as part of widening measures to combat the epidemic.

Although the government says it has yet to document any infections, Syria is seen at high risk.

“If we take the scenarios in China or even in Iran, we are expecting we may have large number of cases and we are preparing accordingly.”

Coronavirus infections have also yet to be recorded in the large parts of Syria outside government control - the east, northeast and northwest.

The rebel-held northwest was already facing a major humanitarian crisis with nearly one million people displaced by fighting in the past few months as the Russian-backed government mounted an offensive.

U.N. political affairs chief Rosemary DiCarlo said on Friday that she had heard from sources on the ground about the potentially devastating impact of coronavirus in Syria.

“If anyone - incredibly - still needed a reason to stop the fighting there, this is it,” DiCarlo posted on Twitter.

He also responded to suggestions of a cover-up.

“The health ministry is the only source of information about this matter and not rumors circulating on social media,” the state news agency quoted him as saying on Thursday. “When there is an infection, it will be announced.”

Still, Kurdish-aligned authorities that govern much of northeastern and eastern Syria are not convinced.

“We took decisions to close all crossings with the regime,” said Ghassan al-Yousef, head of a council that administers areas of Deir al-Zor province east of the Euphrates River.

He cited fear of the virus crossing from government territory west of the Euphrates River, particularly areas controlled by pro-Damascus Shi’ite militias that are backed by Iran and recruit from countries where the virus has spread.

The Kurdish-led administration has banned movement between towns in its region starting from Saturday and a curfew will begin Monday.

In the opposition-held northwest, rescue workers whose usual role is to respond to government bombardments have been sanitizing classrooms. Medics in the northwest fear the virus would spread very quickly in crowded camps for the displaced.

All the countries bordering Syria have coronavirus outbreaks.