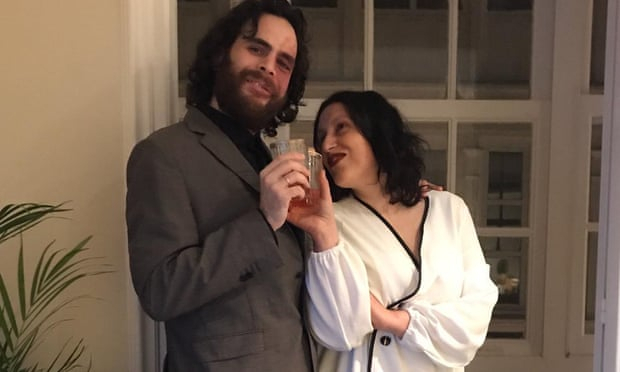 Nearly a year of planning had gone into the day: fresh flowers filled the venue, name cards sat at each of the 190 place settings and the final nips and tucks had been sewn into the bridal gown, the Guardian reports.

What Alba Díaz and Daniel Camino hadn’t anticipated, however, was that their wedding would instead be forced into the confines of Spain’s near-total lockdown, with the bride and groom shouting “I do” as they leaned out of their apartment window, neighbours cheering them on.

The improvised ceremony was a bright moment in an otherwise grim week across Spain and around the world. Coronavirus has tightened its grip on Spain, claiming more than 1,000 lives and sending the number of confirmed cases rocketing to nearly 20,000.

Last week, as they watched the number of Spanish cases climb, Díaz and Camino wrestled with the decision of whether or not to cancel their Saturday wedding. “We had put so much of ourselves in it,” said Díaz. “And so much time and so much money.”

Díaz, a wedding planner by profession, had meticulously planned every detail, transforming a warehouse in a village in northern Spain into the venue of their dreams. Guests had travelled from across the country and from as far as Iceland to be there.

On Friday, as the number of confirmed cases in Spain continued to climb, the couple realised they couldn’t go ahead with the wedding. “It was going to be a lot of people in a small space,” said Díaz.

Despondent, they left the venue as it was and headed back to their apartment in the city of A Coruña. Hours later the country was plunged into a near-total lockdown, with the government banning all social gatherings and ordering residents to remain in their homes save for essentials like food or medicine.

It was Camino who first suggested they try to go ahead with the wedding, albeit modified to fit the circumstances. “We were both so upset,” he said. “I just wanted to get a smile out of Alba.”

When guests started sending them photos, their hair done and all dressed up with nowhere to go, the idea took root. “That’s when we thought, we’re going to get married from our window,” said Díaz.

The next-door neighbour was swiftly recruited to lead the ceremony from his window while another was enlisted as a witness. The couple threw on what they could find; Diaz wore the gown she had sewn to wear before their plans had changed, while Camino dug out a suit he had worn to a recent wedding. A bouquet was crafted out of a few boxes of flowers that hadn’t been used at the venue.

As they began – “On this special day, two friends are getting married,” their neighbour called out, his voice filling the empty street – others, stuck in their homes by the same lockdown orders, began poking their heads out.

Soon dozens were cheering them on, calling for the couple to kiss as Díaz threw her bouquet into the apartment of a friend who lives across from her. “In the end it felt our wedding,” said Díaz. “It was unique, special and very personal,” added Camino.

Now the couple has moved on to their next improvisation in the time of Covid-19: the honeymoon.

“In the end our honeymoon will be at home,” said Díaz, after the virus quashed plans to travel first to Italy and then to Portugal. With a laugh, she added: “There’s not a lot of folk who can say that their honeymoon was 15 days with their husband at home.”