'Nature is taking back Venice': wildlife returns to tourist-free city 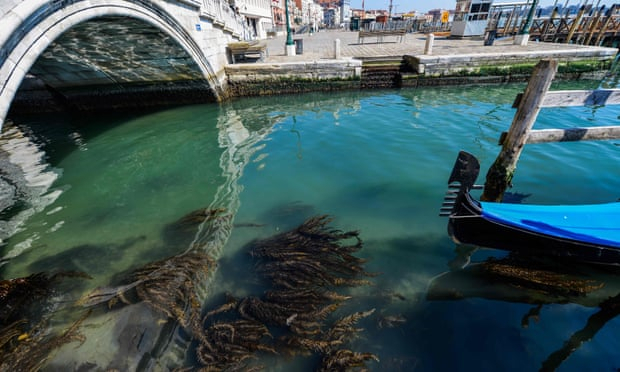 Look down into the waters of the Venice canals today and there is a surprising sight – not just a clear view of the sandy bed, but shoals of tiny fish, scuttling crabs and multicoloured plant-life.

“The water is blue and clear,” said Gloria Beggiato, who owns the celebrated Metropole Hotel a few steps from St Mark’s square and has a view over the Venice lagoon. “It is calm like a pond, because there are no more waves caused by motorised boats transporting day-tripper tourists. And of course, the giant cruise ships have disappeared.”

Under Venice’s strict rules of self-confinement to prevent the spread of the coronavirus – all journeys but a trip to walk the dog or buy food are forbidden – the ancient city has been transformed almost overnight.

La Serenissima’s hundreds of canals have been emptied of speeding motorboat taxis, transport and tourist boats. The chugging vaporetti water buses now run on a reduced timetable. Even most of the gondolas are moored.

The clarity of the water has improved dramatically. Swans and cormorants have returned to dive for fish they can now see. At the Piazzale Roma vaporetto stop, ducks have even made a nest. “Someone has put up a sign saying, ‘Don’t tread on the duck eggs,’’” Beggiato said. “All totally unimaginable a while ago.”

As the death toll from coronavirus in Italy outstrips that of China, the government of Giuseppe Conte has tried to keep citizens at home using a mix of social media and police controls.

But locals are still moving about cautiously to do their daily shopping – except now in a city without visitors. It is a remarkable transformation for a city that until recently saw protests against overtourism under the No Grande Navi (“No more cruise ships”) slogan.

At the world-famous and usually overcrowded Rialto market, most of the fish and vegetable stalls are still open, though customers are few and far between. All markets are allowed to serve customers at a minimum one metre distance.

In a queue to buy fish, Franco Fabris, an architect, reminisced: “When I was a kid growing up, there were far less boats in the canals and lots of kids would jump in and go swimming.”

“For the moment I am not going out fishing as all the restaurants I supply have closed, so what is the point?” said Franco Folin, a fisherman. “But when this all over, we may well see more fish returning because for the moment pleasure fishing is prohibited – there will be an awful lot of extra marine life in the lagoon.”

The apparent cleanliness of the water is not in fact due to a lack of pollution, said Davide Tagliapetra, an environmental researcher at the Institute of Marine Science. He told a local TV station that the reason is the absence of motorised transport, which normally churns up the muddy canal floor.

Matteo Bisol runs the vineyard restaurant Venissa on the tiny lagoon island of Mazzorbo, and has been campaigning for a more eco-responsible, sustainable model of tourism in Venice for some time.

“For goodness sake, it is not surprising there are fish in the canals of Venice,” he said. “If there were not, then we should all be worried as the lagoon here is a fragile ecosystem. People need to realise that if we control and cut down boat traffic in Venice and its lagoon then we could all discover a unique biosphere.”

It is not just the cruise ships that are gone: the souvenir stalls that line the Riva degli Schiavoni, the Murano glass and lace shops, and the bars and restaurants are all closed.

It is a brutal hit to an economy that relies on tourism, but in the meantime locals appear to be rediscovering their city, in an admittedly constrained way.

“We Venetians have the feeling that nature has returned and is taking back possession of the city,” said Beggiato.

“If you ask me today – sunny blue skies, clear canals – then, yes, we would all like Venice to stay like this for a while. But we need, and look forward to, the return of tourists, though maybe not the 20 million a year that we have had to cope with.

“I honestly believe we should take the opportunity of this lockdown to reflect and see how we can be more organised in the future to find a balance between the city and tourism.”