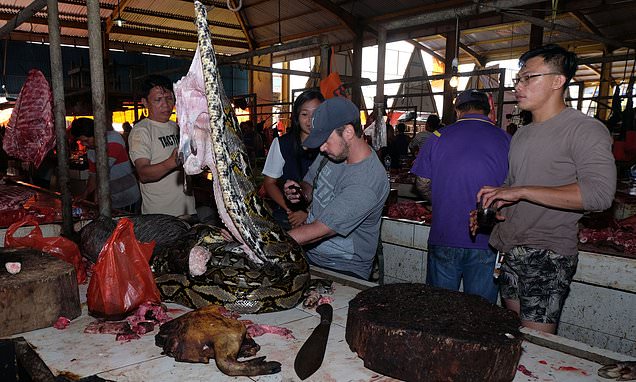 The next pandemic is a case of 'when not if' according to scientists, who say we need to start preparing ourselves for the next one.

Our growing global population is putting us closer to wildlife and at risk of new viruses, warn environmentalists.

The National Geographic's Campaign for Nature say there will be more diseases like COVID-19 due to deforestation and using wild animals as pets, food and medicine.

Enric Sala, a marine ecologist from the campaign says we need to stop ignoring the link between infectious diseases and the natural world.

By 2050 the global population is expected to rise by 2 billion to 9.7 billion which will put extra pressure on food sources - putting humans closer to wildlife.

'What we know is that other animals are an enormous reservoir of pathogens, many of which we haven't yet been exposed to,' he told the Independent.

He says within each of them and in the diversity in our system there are lots of unique viruses that could jump to humans as COVID-19 did.

If we get COVID-19 under control then we need to start thinking about the next one, said Quammen, adding that sweeping changes were needed including making the link between health and conservation.

'I'm absolutely sure that there are going to be more diseases like this in future if we continue with our practices of destroying the world,' Sala told the Independent.

COVID-19 is thought to have been passed from animals to humans at a 'wet market' in Wuhan, China but has not been confirmed by officials.

China has issued a ban on the consumption of wild animals and wildlife markets.

Researchers say new regulations are needed around the world to protect the planet as well as education on the link between damaging the environment and the rise in infectious disease.

'When we tear down tropical forests to build villages, timber and mining camps, kill or capture wild animals for food, we expose ourselves to those viruses,' Quammen told the Independent.

'Those moments of destruction represent opportunity for unfamiliar viruses to get into humans and take hold.'

Diseases that can move from humans to animals and back again account for over 17 per cent of all infectious diseases and cause over 700,000 deaths annually.

The number of these diseases has been increasing since the 1950s when 30 new infectious diseases first emerged. By the 1980s that had tripled.

'At the live markets in Wuhan, for example, there was an extraordinary number of exotic species alive in cages, all in proximity to each other and to humans in a way that you would never find in the natural world,' said Myers.

'It's a combination of the size of the human ecological footprint and globalisation.

'Once a pathogen has made that jump from animals to humans, it has the capacity to spread around the globe very quickly with air travel.'

It's not just a problem of moving in on animal territories though, climate change and rising temperatures are creating better conditions for diseases to spread.

Malaria is being found in higher latitudes and higher altitudes such as the Kenyan highlands due to rising air temperatures from climate change.

'When it comes to populations that depend on the exploitation of nature for their day-to-day living, alternatives have to be provided,' said Sala.

'Governments have a key role in setting policies that protect the nature world and regulate or ban wildlife trade.

Companies can help. The world already produces enough food for 10 billion people, only we waste a third of it.'

He said there is 'no sustainable human health without a healthy ecosystem' and the rise in infectious disease over the past two decades proves it.

Sala says the solution is to keep wild places intact, ban the hunting and traffic of wildlife species and invest in the protection of the natural world.