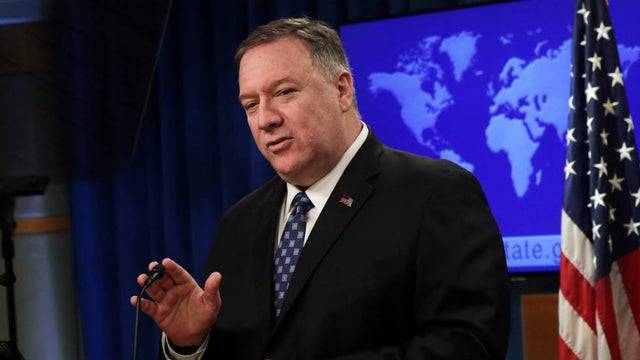 The Trump administration is cutting $1 billion in assistance to Afghanistan after its rival leaders failed to resolve their dispute following Secretary of State Mike Pompeo’s visit there Monday.

“The United States deeply regrets that Afghan President Ashraf Ghani and former Chief Executive Abdullah Abdullah have informed Secretary Pompeo that they have been unable to agree on an inclusive government that can meet the challenges of governance, peace, and security, and provide for the health and welfare of Afghan citizens,” Pompeo said in a statement.

He added the United States is “disappointed” in both men’s conduct, saying “their failure has harmed U.S.-Afghan relations.”

“Because this leadership failure poses a direct threat to U.S. national interests, effective immediately, the U.S. government will initiate a review of the scope of our cooperation with Afghanistan,” he said.

In addition to cutting $1 billion this year, Pompeo said the United States is prepared to cut another $1 billion next year and will start a review of “all of our programs and projects to identify additional reductions.”

Despite the aid cut, Pompeo insisted the United is “not abandoning our partnership with Afghanistan, nor our commitment to support the Afghan security forces.” To demonstrate that, he announced the United States will provide $15 million to help combat the spread of the coronavirus in Afghanistan.

Ghani and Abdullah have been locked in a power struggle since Afghanistan's September elections.

The nation's elections commission declared Ghani the winner last month, but Abdullah continues to dispute the results. Ghani and Abdullah held dueling inauguration ceremonies earlier this month, and Abdullah has vowed to form a parallel government.

The pair had a similar disagreement after they both ran for president in 2014. At that time, then-Secretary of State John Kerry brokered an agreement that made Ghani president and Abdullah the specially created position of chief executive officer.

Pompeo made an unannounced trip to Afghanistan on Monday — even as most official government travel has been canceled amid the coronavirus pandemic — as Ghani and Abdullah’s feud stalls U.S. efforts to make progress on the Trump administration’s deal with the Taliban.

The U.S.-Taliban deal was supposed to precede peace talks between the Afghan government and the terror group, but the March 10 start date laid out in the agreement came and went amid the political crisis, as well as a dispute over a prisoner exchange and continued Taliban attacks on Afghan forces.

The deal calls for the Afghan government to release 5,000 Taliban prisoners ahead of talks. Ghani initially rejected any prisoner releases but later offered to release 1,500 ahead of the talks and the remaining 3,500 during them if violence is reduced. The Taliban rejected the offer, saying it would only accept all 5,000.

In his Monday statement, Pompeo accused Afghanistan’s leaders of “acting inconsistently” with a joint declaration the United States signed with Kabul the same day it signed the Taliban deal.

Specifically, Pompeo slammed them for “failing to establish an inclusive national team to participate in intra-Afghan negotiations or take practical steps to facilitate prisoner releases by both sides as a confidence-building measure to reach a political settlement and achieve a permanent and comprehensive ceasefire.”

The U.S.-Taliban deal laid out a timeline for the withdrawal of U.S. troops that was conditioned on the Taliban’s counterterrorism commitments, but not the success of intra-Afghan negotiations.

The U.S. previously announced the start of a drawdown to 8,600 troops, and Pompeo said in his Monday statement that “we are proceeding with the conditions-based withdrawal of our forces in accordance with the U.S.-Taliban agreement.”