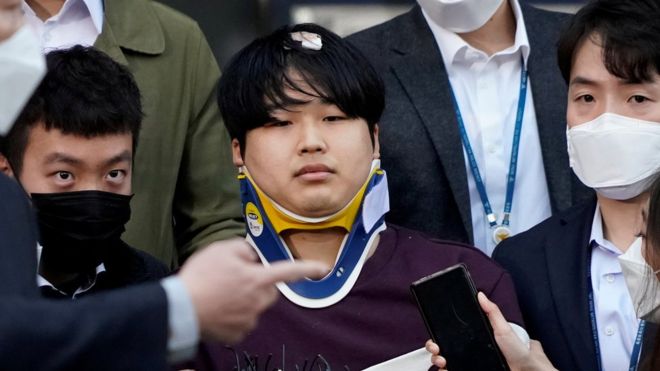 A man accused of leading a group that blackmailed girls into sharing sexual videos - which were then posted in pay-to-view chatrooms - has been named after an outcry in South Korea.

Some 74 people, including 16 underage girls, were exploited.

"I apologise to those who were hurt by me," Cho said as he was led away from a Seoul police station on Wednesday.

"Thank you for putting a brake on the life of a devil that could not be stopped."

He did not respond when reporters asked if he admitted the charges.

He is accused of abuse, threats and coercion, and of violating the child protection act, the privacy act and the sexual abuse act.

How did the chatrooms work?

Customers paid to access the so-called "nth rooms", where extorted content from underage girls was uploaded in real time. Fees ranged from $200 to $1,200.

According to Korean outlet Kookmin Ilbo, each of the eight "nth rooms" hosted videos from three to four girls who had been blackmailed by chatroom operators.

The girls were active on chat apps, or Twitter, and engaged in prostitution or sexting for money.

They were then directed to a Telegram account where the operator extracted their names, phone numbers, addresses, friend lists, and photos, which were then used to blackmail them.

Who were the victims?

One school girl - speaking to Kim Hyun Jung on South Korea's CBS radio - said she was approached online after looking for work.

After being promised money and a phone, she was told to send pictures of herself, followed by sexual abuse videos.

The victim said there were at least 40 videos in total.

"He already had my face, my voice, my personal information," the victim said.

"I was afraid that he would threaten me with that information if I said I would quit."