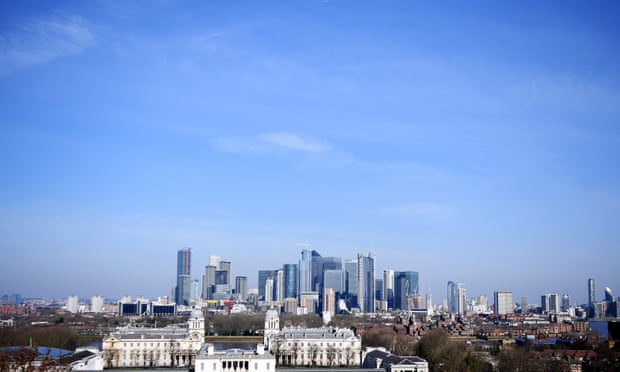 The nationwide shutdown caused by the coronavirus outbreak has led to big drops in air pollution across the UK’s major cities, new data analysis shows.

Levels of toxic pollutants were likely to fall even further, scientists said, as traffic remained off the roads but prevailing westerly winds from the Atlantic returned. Current easterly winds are bringing additional pollution from continental Europe to Britain.

Air quality improvements have been seen in nations around the world from Italy to China, as much transport and industry has ground to a halt. Public health experts have warned that the health damage inflicted on people by longstanding air pollution is likely to increase the death rate from Covid-19.

“The air is definitely much healthier,” said Prof James Lee at York University and the National Centre for Atmospheric Science, who analysed the data. “[Tiny particles and NO2] are the two air pollutants that have the biggest health impacts on people.”

“These are big changes – pollution levels are the equivalent at the moment of a holiday, say an Easter Sunday,” he said. “And I think we will see an even starker drop off when the weather changes.”

The data comes from background air monitoring stations in cities, sited away from main roads. “We chose these because that is where people live,” said Lee.

The average pollution levels for the six-week period before the onset of coronavirus outbreak around the 10 February were compared with the six weeks after. Lee also compared the period after the outbreak with the average of the same period over the last five years. Both comparisons showed large cuts in pollution.

The analysis is preliminary as full calibration of the data takes time, but Lee said it was very clear there had been a significant fall in pollution. The biggest factor is the reduction in road traffic, as other contributors such as gas power station operations, heating for buildings and emissions from farms are unlikely to have changed overall.

One pollutant – ozone – has risen. This is because chemical interactions in the air normally result in NO2 and small particles reducing ozone levels. So as they have fallen, ozone has risen. But Lee said: “The ozone increases are small, and it usually doesn’t become a problem until the summer months anyway.”

Some scientists have suggested that the number of early deaths avoided due to cleaner air might potentially outnumber the deaths from coronavirus. “It is going to be a very interesting epidemiological study, but they take years to do,” said Lee. He said analysis would be difficult because the health impact of the coronavirus was fast, while that of air pollution was slower, and because older people were most at risk from both factors.

“There is no silver lining to the Covid-19 situation,” he said. “But I think it shows we can actually achieve quite a lot without travelling. It shows that if we did work from home more in normal times then we would have an effect on air pollution.”

Levels of NO2 in most urban areas of the UK have been illegally high since 2010 and many areas have levels of small particles above the limit recommended by the World Health Organization. This pollution is estimated to cause about 110 premature deaths every day.