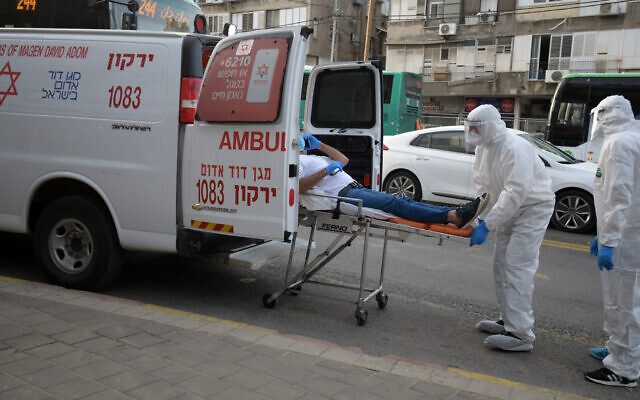 The Health Ministry on Wednesday raised the tally of people infected with the coronavirus to 5,591 as Israel recorded its largest single-day jump yet in new cases.

There was also another death from the virus overnight, bringing the number of dead in the country from COVID-19 to 21.

The ministry data showed 233 new cases since Tuesday night and 760 in the last 24 hours. The previous high for a 24-hour period was the 663 new cases recorded between Monday and Tuesday evenings, 527 of which were included in the latest Health Ministry tally.

There were 97 people in serious condition, three more than the previous night, with 76 attached to ventilators.

Another 118 people were in moderate condition and the rest had mild symptoms. So far, 226 Israelis have recovered from the virus.

The latest fatality was a 98-year-old woman who was hospitalized at Soroka Medical Center in the southern city of Beersheba.

She had a number of “serious and complex” preexisting medical conditions, the hospital said.

There were no immediate details on her identity.

According to the Ynet news site, the woman was a resident of the Mishan assisted living facility in Beersheba, where 14 residents have been infected with the virus.

Another 21 residents were in quarantine at the facility, according to the website.

Last week, a 93-year-old resident died hours after testing positive for the virus.