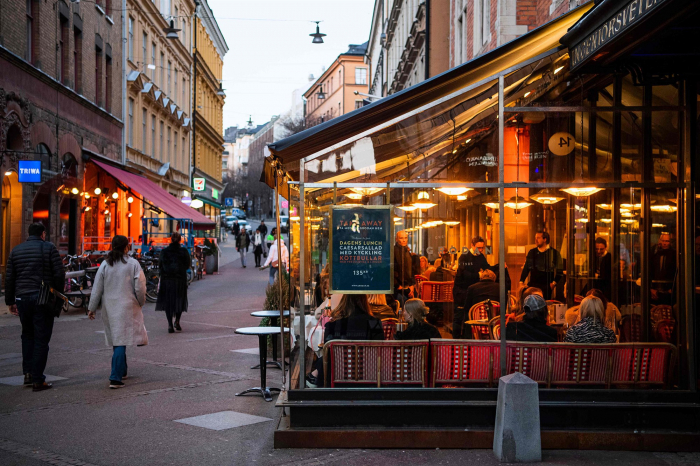 As the temperature passed 50 degrees in Stockholm last week, people congregated in parks unable to resist socializing during the first signs of spring in the Swedish capital.

This country of 10 million has bucked the trend in Europe, where many countries have locked down their residents in an attempt to slow the coronavirus that has spread throughout the world at breakneck speed.

The Swedish government has left it up to individuals to act responsibly and decide whether to stay home or not. Restrictions that are in place are far more liberal compared with those of the nation's neighbors.

A sign outside a pub in Stockholm assures people that the bar is open in March during the coronavirus outbreak. Colm Fulton / Reuters
Public gatherings of more than 50 people are prohibited but there are no restrictions on private meetings, meaning parties and corporate events can still go ahead. Libraries and swimming pools remain open.

Standing at bars has been prohibited but restaurants are still able to offer table service. Students over 16 have been asked to study from home but kindergartens and elementary schools are still open.

Rather than wide-ranging restrictions, the authorities have instead advised the public to practice social distancing and to work from home, where possible, and urged those over the age of 70 to self-isolate as a precaution. In other words, the country has staked its bets on people acting responsibly.

“There are a few critical times in life when you must make sacrifices, not just for your own sake, but also for those around you, for your fellow human beings, and for our country. That time is now,” Swedish Prime Minister Stefan Lofven said earlier this month.

The British government had pursued a similarly laissez-faire approach earlier in the crisis before drastically reversing course and ordering a countrywide lockdown March 23.

Britain's about-turn has left Sweden increasingly isolated in its response to the coronavirus outbreak and has prompted some scientists to suggest the strategy is based on scant scientific evidence and is irresponsible in a pandemic that has already killed more than 35,000 people worldwide.