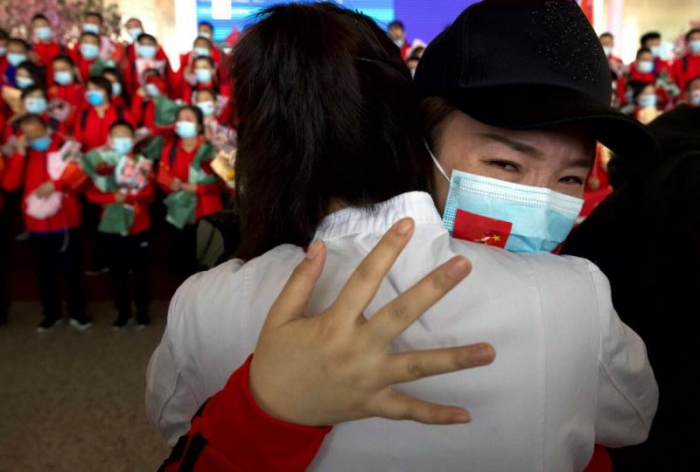 China on Wednesday lifted outbound travel restrictions on Wuhan, the city hardest hit by the coronavirus outbreak, ending a lockdown that sealed off around 10 million people from the rest of the world for 76 days, AzVision.az reports citing Xinhua.

The easing of travel restrictions came after new infections have been drastically reduced across China, marking a milestone in the country's fight against the epidemic while giving confidence to a world grappling to contain the virus's ferocious spread.

After barricades were removed at toll gates around Wuhan at Tuesday midnight, vehicles in long lines honked horns and rushed out, in an outpouring of celebratory sentiment at the long-awaited moment.

"I can't wait to return to my hometown," said Guo Lei, a businessman in Wuhan driving to his home in Shandong Province. "I and my relatives were all stranded here due to the epidemic."

Shortly after midnight at Wuchang Railway Station, more than 400 passengers jumped on train K81 heading for Guangzhou in the south, the first train leaving Wuhan after the lockdown was lifted. More than 55,000 passengers are expected to leave Wuhan by train on Wednesday.

At 7:22 a.m., flight MU2527 took off from Wuhan Tianhe International Airport, heading for the southern resort city of Sanya. It was the first flight leaving the airport after over two months of hiatus.

"It is my great honor to accompany you to the dreamy faraway place," captain Mao Lin told passengers in an inflight announcement.

On Jan. 23, Wuhan declared unprecedented traffic restrictions, including suspending the city's public transport and all outbound flights and trains. Similar restrictions were soon introduced in other areas in Hubei.

A key part of the strictest and the most comprehensive public health measures in modern human history, the lockdown on Wuhan has proved effective in curbing the spread of the deadly virus.

For weeks, the megacity had been the epicenter of the coronavirus outbreak in China, reporting over 50,000 confirmed cases and more than 2,500 deaths, accounting for 61 percent and 77 percent of the national total, respectively.

On March 18, Wuhan reported no new infections for the first time and has since largely maintained the positive trend.

"Locking down Wuhan was an unprecedented measure in China. It was really a surprise to me that such a big decision was made," said Zhang Jingnong, director of the emergency department at the Wuhan Union Hospital.

"In retrospect, it was a completely correct move. Sealing off Wuhan won time for the country and the world to cope with the outbreak," said Zhang, who himself was infected with the virus on the job but has since recovered.

During the time Wuhan was put in isolation, the Chinese government mobilized over 100,000 medical personnel to fight the outbreak in the city. As of Tuesday, over 46,000 patients in Wuhan had been discharged from hospital.

The World Health Organization (WHO) has hailed China's prompt and decisive measures against the pandemic.

"In the face of a previously unknown virus, China has rolled out perhaps the most ambitious, agile and aggressive disease containment effort in history," said a report of the WHO-China Joint Mission on COVID-19 released in late February.