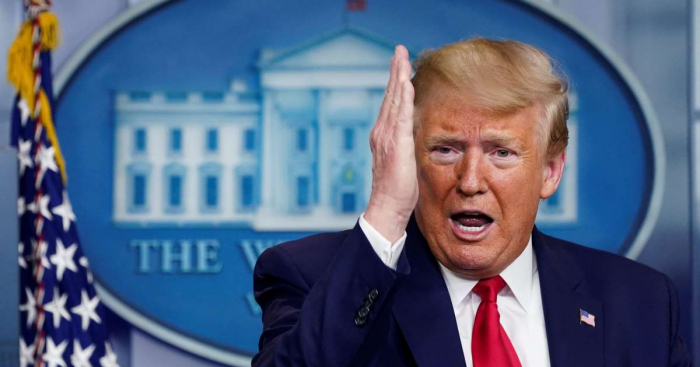 President Trump has zeroed in on the World Health Organization (WHO) as a new target for blame as the coronavirus pandemic grips the United States, the Hill reported.

The attacks come as Trump faces criticism for his own response to the crisis and fit a pattern in which the president has lashed out at other politicians and organizations to redirect blame.

Trump has skewered the WHO for disagreeing with his travel restrictions on China and suggested the organization was sluggish in warning the global community about the novel coronavirus, threatening to withhold U.S. funding for the body.

Trump doubled down on the criticism Wednesday, saying the WHO "minimized the threat very strongly" and that his administration was reviewing funding to the organization.

Conservatives, in particular, have charged that the WHO has been overly trusting of China’s reporting and thus slow to prepare the international community for the novel coronavirus.

Health experts described some of the criticism as warranted, arguing that the WHO could have taken a better approach in confronting the outbreak at the early stage.

“Especially at the initial stage of the outbreak, there is a lot of uncertainty,” said Yanzhong Huang, a senior fellow for global health at the Council on Foreign Relations. “We have to keep that in mind when evaluating WHO’s performance. That said, I do believe that, as a specialized international agency, that it could have taken a more balanced approach when assessing, commenting, responding to China’s response to the outbreak.”

The WHO has shot back at Trump over his threat to withhold funding from the organization, which is still leading the international effort against the pandemic. The U.S. is currently the largest contributor to the WHO.

WHO Director-General Tedros Adhanom Ghebreyesus on Wednesday warned global leaders that politicizing the virus could lead to “many more body bags.”

One government source said there is a feeling among some that the WHO is being used as a scapegoat by Trump for his own shortcomings, but that person disagreed with that belief and said the WHO should have better verified the data it received from China to ensure its accuracy.

The Trump administration has been faulted for delays in testing and accumulating critical supplies that hampered the nation’s response to the coronavirus. Trump himself has faced criticism for initially downplaying the severity of the virus and comparing it to the flu.

On Tuesday, Trump said he never saw memos written by trade adviser Peter Navarro that warned about the possibility that the coronavirus could become a pandemic in the U.S. that would also cause turmoil in the economy.

Lawrence Gostin, a global health law professor at Georgetown University who has served on various WHO expert advisory committees, said he was outraged by Trump’s remarks.

“Of course there’s constructive criticism to be levelled at WHO, just as there is against the White House and capitals in Europe,” Gostin said. “But let’s put this in perspective. WHO had no way of independently verifying China’s data. The U.S. was in the same position. They could see the data and they could make their own determination. The fact that China wasn’t fully transparent is hardly WHO’s a fault.”

The WHO hasn’t been Trump’s only target.

He has admonished governors for failing to stock up on ventilators, arguing that New York Gov. Andrew Cuomo (D) was responsible for the state's shortfall.

Trump and other officials have also pointed to China itself and for a period described the coronavirus as the "China virus."

Experts said the withholding of money from the WHO could have a deadly effect.

“Withholding money would have immediate and devastating consequences for WHO in the middle of a global pandemic,” said Stephen Morrison, director of the Global Health Policy Center at the Center for Strategic and International Studies.

Morrison said China did deserve some criticism for its actions, adding that it was important to separate China’s missteps in responding to the virus from the WHO’s.

Beijing masked the extent of the outbreak for weeks, rebuffed offers of help from U.S. scientists, and has been accused of underreporting its number of infections and deaths. By comparison, the WHO is guilty of delaying its public health emergency declaration and of offering excessive praise for China’s actions, Morrison said.

Conservatives have rallied around Trump’s WHO funding threat.

“They’ve been deceptive, they’ve been slow, and they’ve been Chinese apologists. I don’t think they’re a good investment under the current leadership for the United States,” Graham said on Fox News.

Tedros has been scrutinized for commending China’s response to the virus. The organization as a whole has faced blowback over early statements about human-to-human transmission and what has been characterized as a belated decision to declare a public health emergency of international concern.

Medical experts leading the Trump administration’s response to the virus have been more cautious when addressing questions about the WHO’s role in the pandemic.

Anthony Fauci, the director of the National Institute of Allergy and Infectious Diseases, sidestepped a question in late March about whether the WHO showed favouritism toward China, saying he wanted to avoid wading into politics. He has taken part in regular discussions with Tedros and other WHO officials about progress on a vaccine and virus data from countries around the world.

Deborah Birx, who is coordinating the federal government’s response to the coronavirus, said Wednesday on “CBS This Morning” that there was a need to investigate the reporting that the WHO received from China but suggested the time to do so was once the pandemic had subsided.

"The WHO can only react to the data it's given, and when you go back and look at the timeline, it wasn’t until I think almost the middle of January that China reported that there was the human-to-human transmission," Birx said.

"We have to really investigate reporting and how the reports were received there. I think it did delay the ability to declare this a global pandemic an emergency. We can do all of that when we get through this as a global community to really understand how to do this better the next time," she added.


More about: Trump   WHO